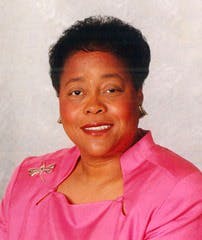 WILBERFORCE, Ohio ― The nation’s oldest historically Black private university named an educator and college administrator on Monday to serve as its president as it struggles with financial and other issues.

The board of trustees of Wilberforce University in southwest Ohio announced that Algeania Warren Freeman was selected after an extensive search. The school, founded in 1856, is facing low enrollment, financial deficits and the risk of losing accreditation.

The Higher Learning Commission, an accrediting body, sent a “show cause order” to the university in June, requiring the school to show why its accreditation shouldn’t be withdrawn. Loss of accreditation could result in students lacking eligibility for federal financial aid and having problems transferring credits.

The commission gave Wilberforce until Dec. 15 to submit a response, including specifics on what the school is doing to address the problems. A commission team will visit the campus in February. The commission also said in June the board needed to hire a president capable of moving the school to “fiscal viability.”

“Dr. Freeman’s experience in institutional advancement and operations, as well as her success in academics and student support, made her the perfect candidate for president of our renowned university,” Mark Wilson, Wilberforce board chairman, said in a statement.

Freeman said in a statement: “Together, through our devotion, we will support this great university’s mission while upholding its legacy.”

The school’s news release stated that the 65-year-old native of Benson, N.C., previously served as president of Martin University in Indianapolis and Livingstone College in Salisbury, N.C. It says she earned her doctor of philosophy degree from Ohio State University, a master’s in science from Southern Illinois University and her bachelor’s degree from Fayetteville State University.

The Higher Learning Commission’s letter said Wilberforce ended the 2013 fiscal year with a $9.7 million deficit, and the projected operating loss for the fiscal year ending June 30 is expected to be more than $700,000.

Also, Wilberforce’s proposed operating budget for 2014 was based on a 500-student enrollment, while the actual enrollment was about 377, the commission said.

The enrolled freshman class for fall 2013 was reported to be 97 students but later decreased to 70, the letter said.

The school’s alumni association has said graduates have committed to raising $2 million in cash donations. The university also says it has a strategy for changes, including realigning Wilberforce’s board, modifying facilities and academics, and revising financial procedures.