As parents and friends were arriving on campus a day before May 8 commencement ceremonies at South Carolina State University (SCSU), the expected but unusual blow hit with a thud ― the state government was firing the school’s Board of Trustees after months of turbulence and uncertainty about SCSU’s leadership and future. 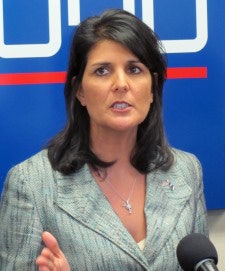 South Carolina Gov. Nikki HaleyGov. Nikki Haley, on May 7, signed a bill into law removing all members of the existing board and beginning the process of appointing new board members. The bill, passed by a Republican-dominated legislature, allows seven Republicans one week to appoint new trustees to the historically Black university’s governing board. Haley selected Milton Irvin, chairman of New York investment bank CastleOak Securities, as her trustee.

The university’s last president, Thomas Elzey, was ousted by the board amid pressure from state legislators and threats to shut down the institution. Four board members subsequently resigned as legislators debated measures to replace them. The 13-member board had only six trustees remaining on it when the bill was signed — other seats were left vacant after previous resignations.

Haley’s signature on the bill the day before graduation ends a tumultuous school year for the SCSU community, but portends more uncertainty for the near future, as financial issues and accreditation decisions remain unresolved.

The legislature granted a $6-million loan to the university last year, but double that amount had been requested. Legislators questioned the plans presented by the school’s leaders to rectify the financial crisis. Meanwhile, enrollment continued to decline, falling below 3,000 with just 2,650 students expected in fall 2015.

In February, immediately after Elzey left, the board named interim provost W. Franklin Evans as acting president. At the time, Evans said in a written statement, “Under my leadership, we will continue to move forward in preserving the rich legacy of excellence that is SC State University.” But for weeks both houses in the state Legislature, which elects members of the SCSU Board of Trustees, wrestled with separate bills, designed to fire the board and appoint new trustees.

Elzey’s departure triggered student protests and exasperation. Former student newspaper editor and graduating senior Dana Brooks told Diverse, “I’ve been here since 2010 and I can’t even count the number of presidents we have had. The students are concerned about the university’s accreditation, with all these changes.”

There was reason for the students’ concern. The school had been placed on probation by the Southern Association of Colleges and Schools Commission on Colleges, citing financial and governing issues. The Associated Press reported last month that a SACS panel was visiting the Orangeburg campus to review operations and a vote on accreditation is expected in June. The commission could lift the probation, continue the probation for one more year or remove the school’s accreditation.

If South Carolina State loses its accreditation, its students would no longer be eligible for federal financial aid.

According to the AP, the university is projecting $23.5 million in debt by the summer. The Orangeburg Department of Public Utilities has threatened to shut off the lights because the university hasn’t paid its bills on time. Meanwhile, ousted president Elzey has a lawsuit pending against the university for wrongful termination.