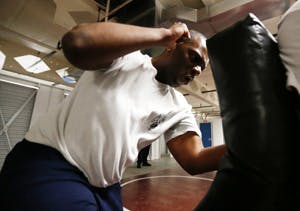 They poach officers from nearby police departments. They entice recruits by playing up the drama and heroism of policing through video close-ups of flashing lights and holstered guns. They wrestle with how to offer better pay.

But most of all, cognizant of the recent turmoil over officer-involved deaths in Missouri, Baltimore and elsewhere, America’s police chiefs are looking for compassionate men and women who are in the field to do good.
Take Victor Ransom, whose first assignment as an officer in Jersey City, New Jersey, is bringing him to familiar territory: his own neighborhood. The 34-year-old former Marine is eager to hit the streets and gain the trust of his community.

“I know what they’re saying out there. I can hear them,” said Ransom, one of seven new black officers in New Jersey’s second-largest city. “I want to show them it’s not always one way.”

Police recruiting has entered a new age. Scrutiny and hostility for officers have amplified. Hampered by low pay and threats to generous pension plans, some of the country’s largest police forces saw significant drops in applicants long before chants of “hands up, don’t shoot,” ”I can’t breathe” and “black lives matter” entered the zeitgeist. Attaining and maintaining diversity remain challenges.

The obstacles police departments face post-Ferguson make some potential officers think, “Is that an occupation that I want to do?'” said Chuck Wexler, executive director of the Police Executive Research Forum.
Departments are seeing a mix of failure and success in attracting applicants.

Nearly one in four police officers work for a department that requires entry-level officers to have at least a two-year college degree or military service, according to Justice Department statistics. Among them: New York since 1996 and Philadelphia since 2013.
Police agencies that used to swing open their doors to a flood of applicants are turning to social media and slick online presentations like the Justice Department-backed Discoverpolicing.org to generate interest in a generation more apt to find excitement in technology-driven jobs than police work.

Recruiters are showing up at churches and job fairs, even military bases. They’re engaging community groups and buying up computer tablets so potential officers can sign up on the spot.

A White House task force on modern policing has called on the federal government to facilitate diversity through assessments and a carrot-and-stick approach tying federal funding to how well a department improves.
Equally important, said task force co-chairman Charles Ramsey, is how officers treat people.
“We have to really work on making sure our officers have positive interactions with people, treat people in a respectful manner and work hard at providing quality service,” said Ramsey, the commissioner of the Philadelphia Police Department.

Nationally, the percentage of black officers remained around 12 percent from 2007 to 2013 — up from about 9 percent in 1987, but still shy of mirroring the country’s 13.2 percent black population, according to a recent Justice Department report.

The New York Police Department is embarking on a project to re-engage black applicants disenchanted by what can be a three- to four-year lag between taking the police exam and being hired.

If successful, the NYPD will have its highest proportion of black cadets — about 14 percent — in eight years and could see even greater interest by next summer with a program to cut the time from testing to hiring to a year, said Deputy Police Commissioner Michael Julian.

“The traditional message around the country is action, benefits and opportunities. They’ll show you the helicopters, the horses and the dogs,” Julian said. “We want compassionate people. People with empathy. People who understand service.”