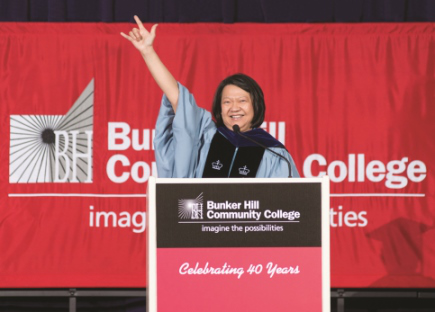 The life story of Dr. Pam Eddinger, president of Bunker Hill Community College in Boston, tracks the upward path of a striving immigrant. Her parents brought their three children to the United States for better educational opportunities than were available in Hong Kong.

Eddinger’s father worked as a waiter in Chinese restaurants in Florida. Her mother did piecework, stitching clothing on an industrial sewing machine at home so she could tend to the children after school. She didn’t have to learn English for her job—and never did.

Eddinger performed well enough in school to get into elite schools: Barnard College as an undergraduate and then Columbia University for a master’s and a Ph.D. in modern Japanese literature. Along the way, she benefited from what she calls “accidental mentors.”

“I came when I was 11. My English was not great, and I was a little immigrant girl in Miami,” Eddinger says. “If someone had not seen the potential, I’d be making widgets somewhere.”

At Bunker Hill, the largest community college in Massachusetts, Eddinger sees her mission as trying to ensure its 14,000 students benefit from mentoring by design, not by accident. About two-thirds of the students are of color and about the same proportion receive Pell Grants, an indicator of low income, and about 90 percent have needed developmental coursework, according to fall 2014 data. More than 800 students from 105 countries speak 75 different languages.

“I see our work in the community college as a restoration of privilege—what our students didn’t get in a middle- or upper-middle- class family, where college-going culture is just a given,” Eddinger says. “I don’t want that potential to be wasted.”

In April, Eddinger accepted an award on Bunker Hill’s behalf for one program that advances that goal, Learn and Earn, which the American Association of Community Colleges (AACC) recognized as the Outstanding College/Corporate Partnership.

The program has placed 347 students in internships with 15 major companies in the Boston area, including Bank of America and defense contractor Raytheon. Companies provide a mentor for each intern, who earns $15 an hour. So far a majority of the interns have completed an associate degree and transferred to a four-year school, while 40 percent have seen their employment extended.

“The interesting thing about Learn and Earn is that you would never expect its kind of scale and prestige coming out of a community college,” Eddinger says.

Her predecessor, Dr. Mary Fifield, helped start the program the year before Eddinger arrived in 2013. It was one of many innovations that Fifield implemented during her 16-year tenure that has made Bunker Hill an educational beacon for area students.

She put in place freshmen learning communities, life mapping to guide students, advising from “success coaches” who attend classes, and allowing developmental courses in algebra and geometry, for example, to be taken at the same time, instead of one after the other.

“Mary did a lot of work. She had—has—a very forward-looking vision,” says Eddinger, who is working to refine and build upon Fifield’s innovations.

That’s why Eddinger was hired. “We found in Dr. Eddinger someone who met all of our requirements for experience, commitment and values—and who understands the kind of infrastructure Mary Fifield has built here. You don’t go forward unless you are standing on something strong,” Marita Rivero, chair of Bunker Hill’s Board of Trustees and a retired public television executive, said at the time.

What Eddinger has done to improve Learn and Earn is an example of her approach. Initially, most students were limited to a one-semester internship, but employers told the community college that “sometimes we need them longer than that.” Last year, Bunker Hill and its corporate partners agreed to make the length of the internships flexible under what Eddinger calls Learn and Earn 2.0.

Eddinger plans to increase the number of interns. “If I were to double this, I may need more staff, but what I will need are actually more partners,” she says.

It is a challenge Eddinger looks forward to in a demanding job that she appears to enjoy.

“The older that I get, the more I see the transformational powers of the community college, the more I realize I will almost never go back to an elite or four-year college as a career,” Eddinger says. “My heart is here.”