Replacement for Scalia Becoming an Issue of a Generation 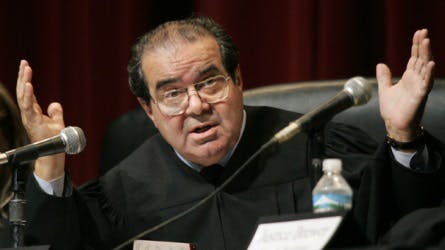 Speaking to the nation on the death of Justice Antonin Scalia, President Obama praised Scalia, calling him a “brilliant legal mind with an energetic style, incisive wit and colorful opinions.”

Said the president from Rancho Mirage, California, where he is preparing for the Association of Southeast Asian Nations (ASEAN) Summit: “He influenced a generation of judges, lawyers and students and profoundly shaped the legal landscape. He will no doubt be remembered for being one of the most consequential members on the Supreme Court. Justice Scalia dedicated his life to the cornerstone of democracy, the rule of law.”

And with that, without being specific, the president said that he would fulfill his constitutional responsibility to name a successor “in due time.”

He added: “There will be plenty of time for me to do so and for the Senate to fulfill its responsibility to give that person a fair hearing and a timely vote. These are responsibilities I take seriously as should everyone. They are bigger than any one party. They are about our democracy.”

When Chief Justice William Rehnquist died in September 2005, his replacement John Roberts was named and installed within a month.

But in a presidential election year, with 34 Senate seats also in play, the death of Scalia and his replacement becomes an urgent campaign issue.

In Saturday’s GOP presidential debate, frontrunner Donald Trump was clear there should be no rush for a replacement, especially one picked by President Obama.

But with an election that could change the mix in the Senate, some observers say there could be at least one vote by the end of the year if the president could come up with a nominee that drew bipartisan support.

In the meantime, if Justice Scalia cast any votes in cases yet to be decided, his votes are now void, according to Tom Goldstein of SCOTUSBlog. But if Scalia was in the dissent or in a more than five-member majority, his vote wouldn’t have mattered.

The odd prospect of an eight-member court makes for a tough majority, with no tiebreaker.

That could be a problem for some cases before the court currently, but maybe not in the matter of Fisher v. University of Texas at Austin, the case involving race-based admissions in higher ed.

After the second hearing of the case December 9, Scalia’s remarks made headlines when he made a point that minority students may be mismatched in the top schools and would do better in “less-advanced schools.”

“There are those who contend that it does not benefit African­-Americans to get them into the University of Texas where they do not do well, as opposed to having them go to a less­-advanced school, a slower-­track school where they do well,” Scalia said. “One of the briefs pointed out that most of the Black scientists in this country don’t come from schools like the University of Texas.”

Most reports suggested that the court would rule to limit the use of race, especially with the thinking that the conservatives would line up Roberts, Thomas, Alito and Scalia.

In defense of Texas would be Ginsberg, Breyer and Sotomayor. Justice Kagan has recused herself from voting on this matter.

The loss of Scalia could mean a 3-3 tie, with Justice Kennedy as an important swing vote.

How would Kennedy vote? In the Grutter v. Bollinger case in 2003 involving admissions at Michigan’s law school, the court upheld use of race as a factor in admissions while Kennedy dissented.

Emil Guillermo is an award-winning journalist and commentator who blogs at www.aaldef.org/blog.