Along with many of the nation’s earliest colleges and universities, Georgetown University’s origins are inextricably entwined with slavery. Georgetown officials announced a series of new steps the university will take to atone for its past on Thursday. 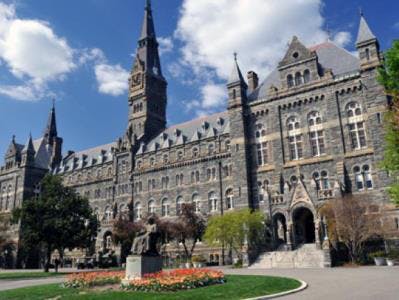 At the time of its founding in 1798, Georgetown derived operational funds from the profits of Maryland plantations, owned by Jesuits and worked by slaves. The university also benefited from the sale of 272 enslaved persons in 1838, at a time when the university was facing financial uncertainty.

Georgetown president John J. DeGioia  will offer a formal, public apology for the university’s historic connection with slavery, and the university plans to also create an institute for the study of slavery, as well as a memorial on campus to the slaves sold in 1838. In addition, Georgetown will continue to foster a deeper relationship with the descendants of the enslaved people sold in 1838, including treating descendants with the same scrutiny and preference in the admissions process as legacy students.

The university will also rename two buildings on campus to recognize two African Americans who were part of Georgetown history – an enslaved man who was part of the sale in 1838, and a free Black woman who was an educator and Catholic sister.

Georgetown takes its cue from recommendations contained in a report released on Thursday morning from a university working group on slavery, memory and reconciliation, which was formed in 2015 and is charged with reconciling Georgetown with its past. The working group committee called on university leaders to make amends for the past, concluding in the report, “An outright apology is not yet part of the history for the University. It ought to be.”

When Georgetown was founded, it derived its operating budget in part from charitable donations, bequests, and from the profits generated by the Jesuits’ Maryland plantations, then run with slave labor. However, by 1838 the plantations were not creating enough profit to sustain themselves, let alone provide funds for the young university.

That reality, in combination with the debts that Georgetown had accrued, occasioned the sale of the 272 slaves forced to work in the Maryland plantations. In total, Georgetown made $115,000, or $3.3 million in today’s money from the sale.

Although it was not the first time Georgetown had sold slaves, it was the largest such sale in the university’s history. The enslaved people sold were sent to labor in difficult conditions on sugar and cotton plantations in Louisiana, and some were later sold again, causing families to be separated.

“The commitments that we have here provide for us an extraordinary opportunity framework in which to support students who are unable to meet the costs of attending Georgetown,” DiGioia said. “These are our policies of need-blind admissions, and meeting full-need, which ensure that no undergraduate is prevented from attending our university because of financial need. This includes those members of our community who are descendants.”

Father David Collins, a professor of medieval history at Georgetown and the leader of the working group, said on Thursday that renaming buildings on campus would have a powerful symbolic impact, despite concerns raised last year at Georgetown and across the country that “renaming buildings could erase history,” and that “in renaming, we become self-congratulatory, or falsely optimistic.”

Georgetown renamed Mulledy and McSherry Halls in 2015. The two buildings are now known as Freedom Hall and Remembrance Hall, but their names will be changed once more to more specifically memorialize Georgetown’s connection with slavery.

Freedom Hall will be named Isaac Hall, in commemoration of the first slave listed in the “Articles of Agreement” that comprised the 1838 sale. Remembrance Hall will memorialize Anne Marie Becraft, who founded a school for Black girls in Washington in the 19th century.

“I think we can soberly and humbly say that Isaac Hawkins and Anne Marie Becraft do not represent an erasure of history,” Collins said. “They help us tell history better.”

The committee also recommended that the university include more input from descendants, and deepen existing relationships. DiGioia said that one way descendants would be more engaged with the process of reconcilation at Georgetown would be in the creation of a memorial for their ancestors on campus. The university committee that will oversee the creation of that work will also solicit their input.

“You have to hear from us,” Joe Stuart, who identified himself as one of the descendants, said on Thursday. “If reconciliation is going to take place as it has done, it needs to start at home, and you don’t start reconciling by alienating. So this is what we hope the university will heed from this day forward. Let’s work together.”