University of Texas at San Antonio President Ricardo Romo, the longest serving and first Hispanic president in the institution’s 47-year history, has announced that he will retire at the conclusion of the spring 2017 academic semester. 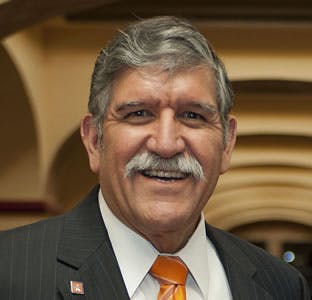 Romo, who joined UTSA in 1999, has led the university through a growth spurt that has resulted in more than 50 percent of all academic degrees awarded during his tenure than the previous 30 years.

“Ricardo Romo transformed UTSA into an emerging research university that graduates more students and offers more degrees and more opportunities than it did the day he walked into the President’s office,” said Texas Congressman Joaquin Castro. “He has made a profound difference.”

Under Romo’s guidance, the university has:

“This is the right time to hand the reins of leadership to a new president, knowing there is a solid foundation of excellence in place and tremendous momentum that will keep UTSA moving forward,” said Romo.

Following a one-year sabbatical, Romo will return to UTSA as a historian at the UTSA Institute of Texan Cultures. The UT System will begin a national search for a new president immediately.