Colleges and universities have a significant role to play in investigating and reconciling the nation’s legacy of slavery, the presidents of Georgetown University and Harvard University said at the Washington Ideas Forum on Thursday. 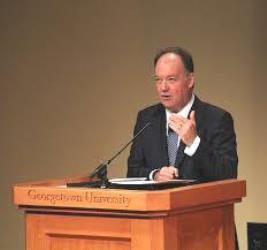 It is a fairly straightforward endeavor to point to a building named after a Confederate leader and request that the name be changed, but it is a far more complicated process to grapple with the murky roots of a university’s origins. As venerable institutions that date back decades and centuries prior to the Civil War, Harvard and Georgetown both existed in a period when slavery was commonplace. As a result, both have direct and indirect ties to the institution of slavery, as do many other of the nation’s oldest institutions of higher learning.

“Folks are having to at last reckon with the long effects of history,” said Ta Nehisi Coates, national correspondent at the Atlantic and author of Between the World and Me, who led the conversation with the two presidents. “I think there’s no problem reckoning with history when those things reflect well upon us, but now we’re being forced to reckon with those things that don’t necessarily reflect well on us.”

Coates led the conversation with the two presidents at the Washington Ideas Forum. In addition to their histories, Coates noted that universities “had a prime role in shaping the leadership class of this country,” during a time when the aftereffects of slavery such as Jim Crow and redlining were alive and well.

At its founding, Georgetown derived funding from the profits of plantations in Maryland run with slave labor. In 1838, when the university was facing mounting debts and the plantations were no longer turning a profit, 272 slaves were sold and dispersed to plantations in the Deep South, where some of their descendants still live to this day.

The university has been actively engaged in the study of its historic ties to slavery and the 1838 sale over the past several years, establishing two working groups to untangle its historic legacy and determine appropriate measures to take in reconciliation. Earlier in September, Georgetown announced that it would begin to give special consideration in the admissions process to descendants of the 272 slaves sold in 1838, among other measures.

Georgetown is a need-blind institution, so it has elected to not set aside scholarship funding for the descendants. John J. DeGioia, Georgetown president, said that the university will look at the applications of children of the descendants in the same way that it would regard those who have an enduring relationship with the university, such as the children of faculty, staff, and alumni.

“In the course of our process of determining undergraduate admissions, we give care and attention in a special way to those folks,” DeGioia said. “It’s not determinative in any way. We’re a very selective institution so I don’t want to overstate what it means, but it was an effort to show the kind of respect we thought appropriate.” 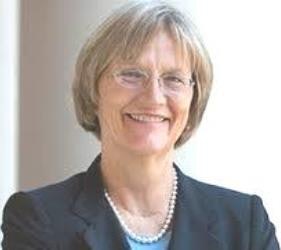 At Harvard, the connection to slavery is a little less direct and currently not as well-documented, said President Drew Gilpin Faust. Yet the notion that New England states were innocent of any ties to the institution of slavery simply by virtue of being north of the Mason-Dixon line is a false one, Faust added.

Slavery was legal in Massachusetts up until 1783, more than a century after Harvard’s founding in 1636. “We are increasingly aware of how slavery was just part of the everyday life of Massachusetts in the colonial period, and therefore of Harvard in the colonial era,” Faust said. In the years leading up to the Civil War, cotton was one of the cornerstones of the economic engine of the U.S. and impacted industries from the South to the North.

Harvard’s connection with slavery remains largely an untold story, but some aspects of its history are coming to light. Four enslaved people lived and worked in Wadsworth House, which was the home of Harvard’s presidents between 1726 and 1849. In April, Harvard dedicated a plaque in their honor.

For a time, colleges and universities saw themselves as research institutions in search of an objective truth, Faust said. “I think in the past decade, and perhaps a little more, there’s been increasing recognition that there is no void within you can undertake objective inquiry, that there have to be certain commitments within which knowledge is pursued and transmitted,” she added. Institutions have a responsibility to inculcate “sets of commitments, to justice, truth and other values that matter to us as a society” among students.

DeGioia and Faust both noted that their universities are active in their local communities. Harvard Law School’s Housing Law Clinic works with tenants in the Boston area who are facing eviction, and the School of Education partners with schools in the metro area.

Georgetown is also invested in the greater D.C. community. For instance, the Georgetown School of Nursing and Health Studies recently released a study that reveals the significant life expectancy gap between Black and White residents of D.C. Black men can expect to live 15 years less than their White counterparts. For Black and White women, the divide is nine years.

“I think we have a huge responsibility to attend to these many issues in the field of race relations and in the aftermath of slavery and in a number of other dimensions of injustice and social crisis as well,” Faust said.