Howard University has decided to rename its School of Communications after media mogul Cathy Hughes, founder of Radio One, Inc.—the largest Black-owned multimedia company in the world. 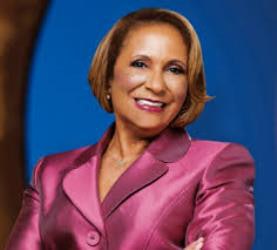 “The Howard community is thrilled that Mr. Liggins has chosen to honor his mother, Ms. Cathy Hughes, in this manner for her pioneering work in the field of communications,” said Frederick. “The gift will have a transformational impact on the School’s commitment to serve the communications industry and as a high-level producer of diverse media specialists.”

Howard will officially honor the Omaha, Nebraska, native at its homecoming festivities later this month with a reception that is expected to draw dozens of celebrities and business leaders.

Hughes, 69, is no stranger to the private Black college located in the nation’s capital. She worked for many years as a lecturer and then became general manager of the university’s popular on-campus radio station, WHUR-FM.

When Radio One went public in 1999, Hughes became the first African-American woman to run a publically traded company. Today, Radio One owns and operates 55 radio stations in 16 U.S markets. The company also owns TV One, a cable/satellite network that serves more than 60 million households.

The decision to rename the School of Communications after Hughes comes six years after Howard quietly dropped the name of John H. Johnson — the founder of Ebony and Jet magazines—from its building.

In 2003, Johnson gave Howard a check for $4 million with the hope that his donation would someday be used as a down payment toward the construction of a new building that would house the communications school that had been renamed that year in his honor.

But after his death, Johnson’s daughter, Linda Johnson Rice, who ran the Chicago-based Johnson Publishing Company, did not share his same passion for the project and opted to support her alma mater, the University of Southern California (USC), instead.

A former USC trustee, Rice gave $2.5 million to USC’s Annenberg School for Communication in 2007 to establish the Johnson Communication Leadership Center, which provides undergraduate scholarships and hosts seminars focused specifically on issues relating to African-Americans in the media.

One trustee, who asked not to be identified, said that the university prefers to forget about that embarrassing episode in its recent history.

“That’s part of our unfortunate past, and, quite frankly, I don’t think we handled it all that well, but we’ve moved on,” he said. “Our focus now is on the fact that students will be able to attend a top of the art School of Communications named after such a pioneering legend.”

According to Frederick, the Catherine L. Hughes and Alfred C. Liggins III Fund will assist the School, which has been in existence for the last 45 years, in purchasing new equipment to support cutting-edge technology.

The Rev. Al Sharpton, who was hired by Hughes to host a daily nationally syndicated radio show in 2006, said that Howard’s decision to name the School of Communications after the media giant is important on several fronts.

“Here is a woman who is by far the largest, most powerful Black communicator in the world,” said the civil rights activist who counts Hughes as a mentor and friend. “She owns more Black radio stations than anybody in the world. She owns a network. She built it starting at Howard University. For her to have the School of Communications named after her, after she launched her unmatched career there, is not only the ultimate success story but the ultimate empowerment story for our people.”