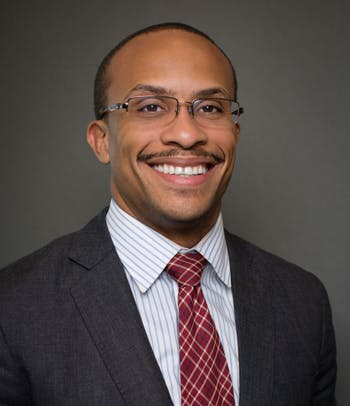 The historically Black college in Atlanta, Georgia did not have to look far for its new leader, who graduated from Morehouse as valedictorian in 2002 and is secretary of the school’s Board of Trustees.

Martin is also a graduate of Harvard Business School and Yale Law School.

Securing permanent leadership has been a challenge for the 150-year-old institution.

Morehouse College’s most recent president, Dr. John S. Wilson, Jr., a 1979 graduate,  was removed from his position after a vote by the Board of Trustees in January and was immediately replaced by William Taggart, the Chief Operating Officer at the college. Taggart served as the college’s interim president until his death on June 7.

Martin’s appointment brings a level of stability to the college community that is still reeling from Taggart’s death. “Our campus has been through a tough season,” said Martin at a press conference held on campus.

Having Martin as the college’s interim president will allow the board of trustees to move forward with finding a permanent replacement.

“The beauty about electing somebody as capable as Harold is that we can take our time,” said Willie Woods, who is chair of the board of trustees. “We’re going to make sure that we find the best person, however long that takes.”

Martin said that the first steps moving forward include ensuring that there is “a real healing process on our campus. The second thing we’re going to do is make sure that our faculty and staff feel fully heard, and that all the wonderful ideas on our campus are understood, sympathized and ultimately informing our strategy,” he said.

The campus is preparing for the August arrival of the freshman class of 2021.

“I remember my very first day on this campus, and we owe it to them for them to have the same student orientation experience, the same opportunity to engage with our staff, the same opportunity to meet our faculty, as I had and we’re going to be very focused on that,” said Martin, whose previous jobs include advising senior executives at institutions of higher education and Fortune 500 companies.

Martin said that during his tenure he plans to raise funds for the college and increase student enrollment.