Several historically Black colleges and universities (HBCUs) have been tasked with replacing their leaders. Bethune-Cookman University, located in Daytona Beach, Florida is the latest.

The university’s sixth president, Dr. Edison O. Jackson, announced his plans to retire one year before his contract was set to expire. His resignation comes amid accusations of financial mismanagement. 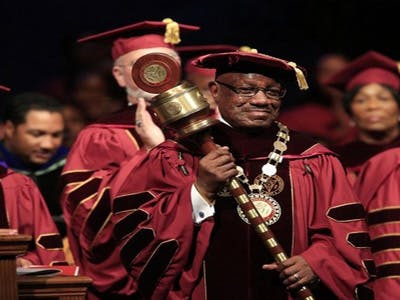 Jackson, who joined B-CU in 2012 and served first as its interim president, was well known within the HBCU community as the longtime president of Medgar Evers College in Brooklyn.

The unfortunate trend in HBCU presidential vacancies has been marked by some presidents leaving one institution for another, while others clash with their boards of trustees and other stakeholders and ultimately are fired or forced to resign.

Some experts say that Edison’s unexpected departure mirrors the unstable leadership that is currently plaguing too many HBCUs.

“I think we have to be more proactive in focusing on what can we do to address leadership crisis,” says Dr. Robert T. Palmer, an associate professor of educational leadership and policy studies at Howard University. “It’s kind of like sitting back and watching a house burn down. We know there’s an issue in terms of leadership, and we feel that we’re familiar with the issue, but the question is, ‘What are we going to do about it?’”

Even though Jackson is leaving the storied institution that was founded by Mary McLeod Bethune, B-CU’s financial problems will likely linger for many years.

Last year the school had an operating financial loss of $17.8 million and it now faces $306 million in financing debt after it constructed a new dormitory that opened its doors in fall of 2016.

Chris Haigler, a member of the school’s marching and symphonic bands, said that the financial difficulties that the college is facing may have an adverse impact on his ability to remain in school.

Haigler is the recipient of a $15,000 band scholarship.

“If stuff happens with that [school funding], then it’s going to affect the band by cutting scholarships, and people won’t be able to afford to attend school anymore,” said Haigler, a rising senior.

Haigler said that although he thought Jackson was “approachable,” he said that he does not believe the university’s finances were managed wisely during his presidential tenure.

Still, he said that he found Jackson to be visible on campus.

“When I see him he’s a really cool person,” said Haigler. “He takes initiative and he’s a kindred spirit.”

Haigler said that he believes the next president should make the university’s finances their main focus.

Dr. Felecia Commodore, a Senior Research Associate at the Center for Minority Serving Institutions at the University of Pennsylvania and an assistant professor at Old Dominion University, is hopeful that a change in leadership may be just what the campus needs.

“Bethune-Cookman has had very concerning issues occurring recently.  Leadership changes can often bring new insight into situations,” says Commodore, who is an expert on HBCUs. “However, I think it is important to remember that leadership at a higher education institution is not embodied solely in one person. Leadership is a team effort, including the board of trustees and other key administrators. “

Palmer said that the search for a new leader could potentially help B-CU, particularly if the leader is team-oriented and “thinking about how they can use the position of the presidency to advance the school and to serve all parties involved,” he said.

Jackson was the subject of widespread criticism after he invited Betsy DeVos, the Secretary of Education, to speak at the 2017 commencement. DeVos was booed by B-CU graduates and shortened her address.

Moving forward, Palmer said he hopes that B-CU and other HBCU boards of trustees will seek out, “people who are new, innovative and different,” by considering  leaders from non-traditional backgrounds who have a track record of revitalizing college campuses.