Fisk University is one of many historically Black schools that have felt the pain of financial issues over the years. However, under the leadership of its new president, Dr. Kevin Rome, these issues may soon diminish.

Rome was appointed president in March 2017, which would mark the beginning of the end of his four-year tenure at Lincoln University, another historically Black institution in Jefferson City, Missouri. He officially took office at Fisk University on July 1, succeeding interim president Frank Sims, who will be the new board chair in October. 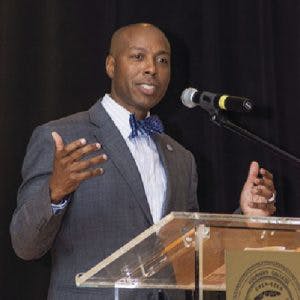 “The rich history and legacy of Fisk University speaks for itself,” says Rome. “I loved my experience at Lincoln University. We had awesome students and I met great people, but there was something attractive to me about Fisk. W.E.B. DuBois and that whole era that contributed to the legacy of our HBCUs, I wanted to be a part of that.”

Serving in leadership positions is nothing new for Rome. Having served at his alma mater Morehouse College, Clayton State University, and Indiana University-Purdue University, Indianapolis, Rome has collected over 15 years of experience that can potentially be a guide to how he operates at Fisk.

His appointment with Fisk has brought a sense of comfort, stability, and hope that the financial problems the school has faced will end, and a new narrative will be created for the 151-year old school.

“This past fiscal year Fisk exceeded its annual fundraising goal by over $1.4 million,” says Meeks. “Moreover, the alumni participation rate exceeded 30%. This progress is attributed to the hard work of Office of Institutional Advancement and alumni.”

Fisk has also formed three groups, The Local Fisk Alumni Club, The Fisk Fund Steering Committee, and the Class Agent Network, that have made progress in bringing more money to the institution.

“Each organization is charged with promoting fundraising initiatives for Fisk University,” says Meeks. Fisk has also hired an outside consultant to teach alumni the dos and don’ts of fundraising, such as how to cultivate donors and how to determine what to ask for. Meeks says the strategy has been very successful.

In addition to improving finances, Rome said he hopes to be a leader of permanence and hold his position as president for at least 12 to 15 years. During that time, Rome said he will develop a plan to help the institution progress.

“That will be a collaborative effort with me, the board, the alumni, the faculty, the staff, the community, all of our constituents, working together to come up with a plan to move the university forward and I’m just a conduit to make that happen,” he says.

Bringing experience in community and alumni engagement from his time at Lincoln University, Rome foresees that this experience will be an advantage to Fisk and its surrounding Nashville area.

“There’s focus on the school, but it’s really a community effort, in terms of alumni, faculty, ‘Nashville-ians,’ and African-Americans as a whole,” says Burton, a former president of the Detroit Fisk Alumni Club. “It’s not just on Dr. Rome, it’s just on all of us. Given our economic power, the Black community in America has over a trillion dollars that we have in spending power, and just a fraction of that would help tremendously our HBCUs and our other institutions that are important to our community.”

With the new school year already underway, Rome has begun welcoming new and returning students to campus, and has a list of priorities that have accumulated since stepping into his new position.

“My highest priority is to learn as much as I can about Fisk University, its alumni, the Nashville community, our constituents, and the board,” Rome says. From what he has learned so far, Rome says his priorities are financial stability, developing more innovative programs and majors, increasing enrollment, and improving connections with alumni and the community.