Bennett College, one of only two remaining historically Black colleges for women, has been here before.

At the start of a new academic year, it’s a precarious place. For the tuition-driven college, fall enrollment numbers are in flux. And contingency plans are being put in place if a legal battle to stay accredited fails, debts can’t be paid and the doors have to shutter. These are among the large and looming challenges confronting the 146-year-old institution — and that now belong to Suzanne Elise Walsh, Bennett’s surprising and unconventional choice for its new president. 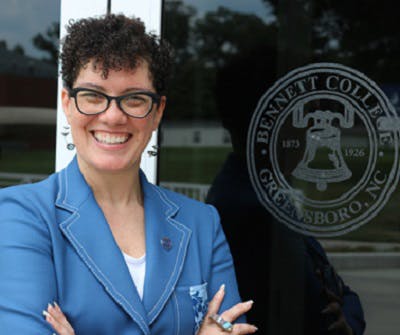 Until 2018, Walsh was deputy director for the Bill & Melinda Gates Foundation’s work on postsecondary education. Now, as Bennett charts a new path forward, it is counting on Walsh, who will be a first-time college CEO, to be its rudder, innovator and fundraiser.

“Sure, it’s daunting and scary,” Walsh revealed in a recent interview about her first-ever role as a college president regarding the enrollment, accrediting and funding challenges she inherited — and must tackle. At the same time, Walsh says she’s both realistic and optimistic about what lies ahead, and “excited and giddy” to welcome her new students, faculty and families this month to the Greensboro, N.C. campus.

The 50-year-old Walsh won’t have the benefit of a collegial and customary hand-off from her predecessor. The board dismissed Dr. Phyllis Worthy Dawkins, Bennett’s president of three years, just six days before announcing that Walsh would be stepping in to take the helm.

The dizzying shift, which was likely hatched while Dawkins was still in office, caught many of the school’s supporters off guard, including Bennett’s own alumnae, they say. Just months earlier, Dawkins had become the face of an emergency campaign to raise $5 million. Bennett was in a race to restore its accreditation and be in good standing with its regional accreditor, the Southern Association of Colleges and Schools Commission on Colleges (SACSCOC). In 1957, Bennett was one of the first and the only private Black college to be admitted into full membership in SACSCOC.

Far surpassing its goal, the campaign netted $9.5 million in about 60 days. The national appeal, known by its hashtag #StandWithBennett, was bolstered by the prayers and dollars of its Belles, as its students and alumnae are known. And it was fueled by a variety of donors, from churches to pop stars and other higher education institutions. Among them was North Carolina’s High Point University, another private, United Methodist Church-affiliated school, that pledged support for Bennett and donated nearly $1.5 million. In the process, Dawkins was largely credited with garnering some of the campaign’s largest gifts and quickly forging new alliances.

Challenged to find help for a school that was on life support, Dawkins crisscrossed the country, appealed from church pulpits and appeared often in the media, telling Bennett’s story and speaking about the need to revamp the institution. These were critical and needed efforts that some close to the situation say Dawkins failed to do much of during her tenure — and may have factored in her departure.

Walsh’s work in the foundation world suggests she may be an impactful fundraiser, someone who Bennett — and most HBCUs can use right now. She comes to Bennett at a time when lingering accreditation and funding challenges continue to raise questions about the long-term stability at the historic college; and as some cautiously hope that the board’s new pick won’t join the trail of recent presidents who have cycled through without moving the school closer to being fiscally strong, in good standing and more competitive for the long haul.

Dr. Gwendolyn O’Neal, who was appointed interim president on June 21 — the same day trustees announced that Dawkins was stepping down — continued in that role through July and now serves as chief operating officer.

Walsh, who has also held leadership roles with the  and The Heinz Endowments, assumed her presidency on Aug. 1, but on a part-time basis until January 2020. Her press office confirmed that during this critical first semester, the board approved time for Walsh to relocate from Seattle, Wash. and wrap up “her existing contracts and commitments,” which means travel and time away from the urgent issues facing campus. 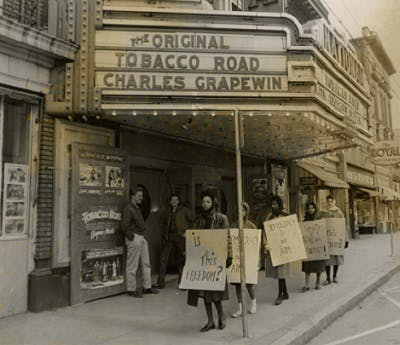 Bennett students protesting in the 1960’s.

Moving forward, Walsh says she and O’Neal will be Bennett’s “interim leadership team.”

When she stepped down from her post at the Gates Foundation a year ago, Walsh said she did what many alumni of the company do — became an independent consultant. She founded and continues to manage Discerning SEWLutions, LLC, which she describes on her resume as “primarily working at the intersection of innovation, technology and learning” and “helping organizations anticipate and prepare for the future.” The company bears her initials: SEW for Suzanne Elise Walsh.

Dr. Gladys A. Robinson, Bennett’s board chairwoman, said the liberal arts college “sought a new president to embrace and champion innovative ideas that ensure our long-term viability. We were committed to having an exceptional leader in place when our students returned for the 2019-2020 academic year.”

Gwendolyn Rice, the immediate past president of Bennett’s National Alumnae Association, has caught Walsh’s optimism. She was on the board of trustees when Walsh was selected to lead.

As Rice looks forward to a brighter and more financially stable day for Bennett, she says it’s been tough to overlook a stumbling block like the board’s poor choices in picks for president in recent years over the objections of its most important stakeholders, alumnae. Rice says such moves have taken a toll on Bennett.

“Each time we have revolving door presidents, it weakens the institution,” Rice says. A Bennett Belle who was a student when Willa Beatrice Player served as the college’s first female president from 1955-1966, Rice says it was a wonderful time to be at Bennett. Activism, tradition, academic excellence and stability were hallmarks.

As Rice looks to the future, early excitement throughout the Bennett family and off campus for its new president makes her hopeful. She wants to believe that Walsh will deliver some of what Bennett needs.

“Suzanne understands enrollment management. She speaks with a sense of urgency about making us a college for the 21st century, and about being committed to women in higher education.”

Speaking from her home in Seattle, Walsh is bubbling with ideas for Bennett in the South. Most have to do with preparing women leaders of color for roles in civil rights, social justice — and for the world, “especially in today’s climate.” For that, Walsh can start by borrowing a page from Bennett’s history.

Well-heeled Bennett Belles have long been at the forefront of social and civil rights change. Four men from the neighboring North Carolina A&T State University are known for sitting down at the Whites-only Woolworth’s lunch counter in downtown Greensboro in February 1960. Belles also joined the protest, but probably lessor known is the role that they played as leaders and planners of this historic push for racial integration. Their activism was backed by Willa Player, Bennett’s president at the time and the first African-American woman president of a four-year college.

But forging the future for young Black women who come to Bennett, says Walsh, means “re-invention and transformation.” A “realistic” Walsh, though, says she knows that the change that alumnae and others want for Bennett will be met with resistance at some point. That’s because “change is hard. Change is about loss,” she said in an interview with the News & Record in Greensboro.

Credibility in the HBCU Community

Walsh received her undergraduate degree in social work from Cornell University and master’s and law degrees from Case Western Reserve University, but she has never been an administrator at a four-year college, including an HBCU.

When taking the helm, ties to the tight-knit Black college community matter, as does having been on the inside of an HBCU, suggests Dr. Leonard Haynes, an expert on HBCUs and a senior advisor in the office of the undersecretary of the U.S. Department of Education. Haynes doesn’t know Walsh, but contends though her work with HBCUs at the Gates Foundation may have been productive, she’s still “on the outside of these institutions.”

Walsh agrees, bonds to the HBCU community do matter, but “not being an HBCU insider” doesn’t concern her. To her credit, Walsh says she’s spent more than a decade building linkages with a cohort of HBCU presidents and their institutions, largely through her work on the Frontier Set, a multi-year Gates Foundation program concerned with “institutional transformation.” The daughter of parents who were educators, Walsh says her approach is always to listen and to learn what she doesn’t know.

In 2012, Dr. Ronald Carter, then president of North Carolina’s Johnson C. Smith University, was invited to represent his institution in the Frontier Set, made up of a select group of 31 colleges, universities, and state systems. More than a dozen are HBCUs, including Alcorn State, Jackson State University and Morehouse College. For Walsh, it was important to create a community, working with both public and private HBCUs and creating opportunities to showcase their value.

Bringing our HBCUs together and to the table “was Suzanne’s handiwork,” says Carter, who credits the program and Walsh for providing a valuable playbook to “re-imagine” their institutions, leverage their assets, build capacity, be a platform for public issues, improve student outcomes and more. To get an idea of how Walsh will navigate Bennett’s transformation, that same Gates playbook will likely be instructive.

Advancing change and innovation at HBCUs can take money and connections. Walsh made sure that they had both, says Carter of a $2.5 million grant awarded to Johnson C. Smith, and the opportunity to tap into “her incredible network.”

In 2017, Carter stepped down as Smith’s president. Today, he helps other institutions and higher education organizations vet and find their next leader. Walsh represents the kind of collegial leader and forward thinker that HBCUs need to be innovative, data-driven in decision-making and student-centered, says Carter.

As Walsh takes the helm at Bennett, she says that the network of HBCUs that she’s built is within reach. “It’s what gives me both comfort and confidence. I don’t feel alone.”

This article appeared in the Aug. 8 issue of Diverse.  It has been updated to correct the name of Gwendolyn Rice.