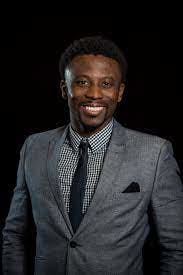 Dr. Stanley Andrisse, assistant professor at Howard University's School of Medicine and a formerly incarcerated person directing Prison to ProWhile locked up on a ten-year prison sentence in his early twenties, Dr. Stanley Andrisse was told that he was “scum,” and that his life was hopeless from here on out. But soon, higher education changed all of that. When Andrisse left prison, he pursued a doctorate with the support of a few professors who saw potential. Today, he is an assistant professor at Howard University’s School of Medicine, where he researches diabetes as an endocrinologist.

“I know very personally and intimately the power of education,” said Andrisse. “It became this transformative tool that helped take me out of this rock-bottom hole that I was psychologically, emotionally, and physically in. Because it brings back a sense of self-worth after being told that you were worth nothing. You can see instead that you can bring something to the community and the world.”

“Centering the voices of currently and formerly incarcerated people is important in this process,” said Andrisse.

Since the 1994 Crime Bill, formerly and currently incarcerated people had been banned from Pell Grant funding. Yet even at that time, experts say, it was known that college education in prisons reaped powerful benefits, helping make prisons less violent places and improving the odds of success for people once they left prison.

“In the 90s, prison wardens pleaded with Congress not to take away Pell Grants,” said Dr. Jessica Neptune, the national director of the Bard Prison Initiative, one of the country’s most respected and longest-running college education programs. “But the move in 1994 was symbolic. It was a message that we as a society held very little value in the lives and futures of people in prison. So, it is really significant that this punitive urge has dissipated. But it’s not a guarantee that what comes next is what we’re going to get right.”

Congress last December lifted the Pell Grant ban with bipartisan support. Now it is up to ED to decide on how that expansion will look.

“There are a lot of questions about quality programming, whether predatory institutions will move into this space just to make money off of people without giving credible degrees or certificates,” said Andrisse.

Hundreds of thousands of people stand to earn degrees. Yet on top of tightening institutional eligibility requirements, advocates worry about racial equity within programs in prisons.

“I visited over 25 college in prison programs in my past work, and so many times, I walked into the prison and saw people of color cleaning up, cutting bushes outside, but then when I got past the front gates where I saw Black people, I saw majority white students inside in the program,” said Terrell Blount, director of Formerly Incarcerated College Graduate Network, an advocacy group.

“What are you doing to reach this population, meaning Black students?” asked Blount, referring to the disproportionately high representation of Black students and students of color in prisons, yet not in college classrooms in prisons. “What we’re ultimately doing if we continue to go down that route is exclude people of color from this opportunity."

Margaret diZerega, director of the center for sentencing and corrections at the Vera Institute of Justice, a nonprofit national research and policy organization, agreed with the importance of this issue. She leads Vera’s work on expanding access to postsecondary education for people in prison.

“How can we support students applying and persisting and completing their credentials in prison so that students of color are having the same access and completing at the same rates as white students?” said diZerega.

Relatedly, Andrisse has noticed that few leaders of prison education programs are formerly incarcerated like him. He hopes that this problem of representation at the leadership level will also be addressed in rulemaking. In addition, Andrisse pushes for greater attention of how programs can help their students complete their degrees at the same college once they leave prison.

DiZerega also said that she will be paying attention this week to how college accreditation agencies will become more engaged. With the likely expansion of colleges teaching in prisons thanks to more federal funding, these agencies will play a big part in successfully implementing programs.

“We know that students in carceral settings aren’t going to have the same range of options that a student in the free world will have,” added diZerega. “So if people are using their Pell eligibility for a postsecondary education, we want them to have a quality experience and to be able to choose the career path that they want.”

That means using the same faculty and course materials for her programs that would be used on campus. There will also likely be questions around how jails and juvenile facilities as well as prisons apply the same education standards.

Part of that question of quality to Neptune is to look beyond recidivism metrics, or whether a person is sent back to prison, when trying to understand the program’s impact. College programs in prisons have been proven to dramatically reduce recidivism rates, which has helped sway support across both sides of the aisle for Pell Grant expansion. But to Neptune, that emphasis comes with problems.

“We want all of our students to come home and thrive,” said Neptune. “But you want students to see you as a college that is interested in them as students, not as people in prison. A focus on recidivism takes away from that. And from a policy perspective, what does it mean that an education is just about preventing people from doing crime? The assumption becomes that these people are inherently criminal until there is some kind of intervention. Rather than how college is about opportunity and access for everyone.”

Neptune and some fellow advocates argue that conversations on prison education programs should be more closely tied to those around college access and affordability, especially for marginalized communities.

“One thing I think we are getting right is the recognition that directly impacted people, alumni who went through prison and college, are at the table,” said Neptune. “I think that is essential to finding a way forward that avoids some of the unintended consequences that can happen in the reform world.”