General Colin Powell—who came from humble beginnings in Harlem and the South Bronx, to become the first Black Chairman of the Joint Chiefs of Staff and later U.S. Secretary of State—died on Monday from complications related to COVID-19. He also suffered from multiple myeloma, a blood cancer. He was 84.

A fierce advocate for public higher education, Powell often talked about his love for City College of New York, where he earned his undergraduate degree, participated in ROTC and received a commission as an Army second lieutenant upon graduation in June 1958. 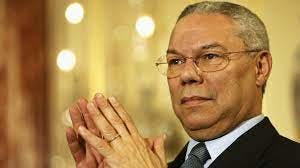 The son of Jamaican immigrants, Powell would go on to serve in the Army, eventually rising through the ranks to become a four-star general and Commander of the U.S. Army Forces Command.

“No words seem adequate at this moment. This school is his,” said Dr. Andrew Rich, the Richard J. Henley and Susan L. Davis Dean of the Colin Powell School for Civic and Global Leadership at City College of New York. “He was our leader and our friend. His pride in this place gave all of us strength, and we are heartbroken.”

Rich said that the Colin Powell School reflects Powell’s vision and his passion for education.

“General Powell committed himself to every student who walked through our doors. He loved this place, and loved meeting every one of them,” he said, adding that Powell would often show up early to meetings on campus so that he could stand in front of Shepard Hall and meet students as they walked by. “He’d hear their stories and tell them his own. He would encourage them to work hard and pursue their dreams. He always reminded them—and all of us—that ‘they’re just like I was’ some 65 years ago now.:

Rich said that Powell never missed a Colin Powell School graduation, and he took the time to shake the hand of every student earning a degree.

“It’s hard to imagine graduation without him,” Rich said. “But this school remains his, and every graduate of the Colin Powell School is a part of his legacy. He was proud of this place, and we are even prouder to have had him as our leader.”

Powell’s reach across higher education extended beyond CUNY and he eventually earned an MBA from Georgetown University. Still, he was deeply committed to Historically Black Colleges and Universities (HBCUs) and served for many years on the Board of Trustees at Howard University and the Board of Directors of the United Negro College Fund (UNCF).

“General Colin Powell dedicated his life to making a difference as a politician, diplomat, and retired four-star general,” the UNCF said in a statement.

A lifelong Republican, Powell endorsed Barack Obama for president. He also used his public platform to create America’s Promise Alliance, the nonprofit organization that he founded in 1997 to focus on education.

“The reason why I was able to achieve some level of success in our country and in our society was because I got a good public education,” he told Diverse in a 2013 interview with journalist Jamal Watson. “And I don’t think we have any greater investment to make in our society than to educate young people.”

Powell supported affirmative action, but was skeptical about its longevity.

While vastly popular among the general public, including many Democrats, some scholars say that Powell’s willingness to invade Iraq—following the attacks on September 11th –tarnished what would have been a largely unblemished legacy.

“Secretary Powell’s political legacy is complicated, but his personal legacy is a man of deep conviction who blazed trails once thought impossible,” tweeted Dr. Khalilah Brown-Dean, associate provost and professor of political science at Quinnipiac University. “He showed all of us that grace and mercy lift us even through and especially through our stumbles and challenges.”