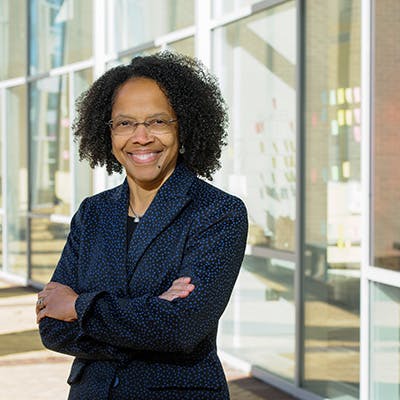 Dr. Gilda Barabino, president of the Olin College of EngineeringThis week, the American Association of Colleges and Universities (AAC&U), a global membership organization centered on undergraduate liberal education, kicked off its annual meeting with a focus on educating for democracy.

Dr. Lenore Rodicio, a senior fellow at the College Excellence Program at the Aspen Institute, an international nonprofit and nonpartisan organization focused on equity, introduced the panel.

“In recent years, faith in institutions, government, and democracy itself has plummeted, especially among traditional college-aged students,” she said. “As political polarization and intolerance for difference continue to grow and thrive in the U.S., colleges and universities have an essential role in supporting our democracy.”

The panel's facilitator, Dr. Lynn Pasquerella, president of AAC&U, set the stakes of the roundtable discussion when referring to mounting public criticism of American universities, particularly that they have been largely absent in confronting threats to democracy, from the spread of misinformation to voter suppression to rising authoritarianism. To kick off the conversation, Pasquerella asked the panelists to share how their own undergraduate liberal educations have informed their take on the role of universities in a democracy.

Dr. Roosevelt Montás, a senior lecturer in American Studies and English at Columbia University, grew up in a rural part of the Dominican Republic and moved to New York City as a child. But “through a series of fortunate accidents,” he spoke about how he ended up as an undergraduate at Columbia to “receive one of the most elite educations that many can buy.” Montás has since realized that his story is rare.

“That fortune, that privilege that I happened to have enjoyed is denied to thousands—and maybe millions—of people who could benefit from it in the way that I did,” he said. “And so it has become a kind of mission or calling to me to do everything I can in my career, in my advocacy, in my teaching to bring that kind of intellectual richness, that kind of opening of the life of the mind, that expansion of horizons that I had experienced into the populations that have been traditionally excluded from them as aggressively as possible.”

Dr. Gilda Barabino, president of the Olin College of Engineering, a private undergraduate college founded in 1997 and known for its project-based curriculum, added that she understood from a young age the reality of a separate but unequal education while traveling around the country in her military family.

“I remember early on in the first grade when we were living in Dover, Delaware, that I was the only Black person in my class, and those classes were considered integrated,” said Barabino, who also spoke of getting bussed to a Black school in the third grade in Florida. “So, I saw that the color of your skin and where you lived could dictate the access you had to education and the quality of your education.”

Panelist Dr. Timothy Eatman, inaugural dean of Rutgers University’s Honors Living-Learning Community, a college access program, argued that talking about liberal education and democracy must also include talking about home. Eatman said that his father taught in the New York City public school system, but he left after he became a pastor because "he didn't think they cared much about Black and brown students." His father sent Eatman to school at their family's church, which Eatman said felt "like a home school." That taught the dean the importance of community engagement in education.

“Home is where you learn how to argue, how to think differently, even though no home is perfect,” said Eatman. “But when we look at the research that tells us there’s a sharp decline in students nowadays thinking that higher education is having a positive impact in society, maybe some of those students never saw higher education as a home.”

He recalled the mentors who treated him “like family." With his students, Eatman said that he seeks to do the same. Pasquerella agreed "that a sense of belonging is more critical than ever as we look to disrupt higher education for the twenty-first century to serve the needs of our students."

As a first-generation student of color, panelist Nicole Washington, vice chair of the Board of Trustees at Miami Dade College, a public, open-access college in Florida, said her high school guidance counselor discouraged her from applying to selective colleges. She did so anyways and went to Princeton University. Yet Washington said that she initially struggled at Princeton to find that community that Eatman emphasized.

“The work I do now is based on student success and a sense of belonging because while higher education has become more diverse, it has not necessarily become more inclusive for people who do not fit into a certain box,” said Washington, who noted that almost 60% of undergraduate students across the country are first-generation.

To her, admitting these students but stopping short of building a campus that supports them, misses the point. Washington said that these issues are critical to improving higher education’s “value proposition” today to preserve democracy.

“If we don’t recognize that every student who comes through our doors and does not graduate is contributing to that echo of the value proposition of higher education, then we will keep having to deal with people questioning our value,” said Washington.

She, Barabino, and Eatman stressed the need to meet students where they are to fulfill higher education's responsibility to a democracy. Regarding the criticism that universities have received from that the left and the right, Barabino added that leadership matters.

“We need leaders who are courageous and unapologetic about supporting their values,” she said. “I don’t think we’ll be able to do that if we don’t hold a mirror up to ourselves and take a critical look to hold our leaders accountable.”