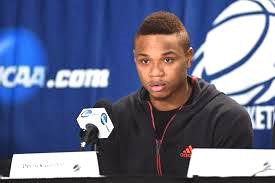 UMass guard Derrick Gordon says he was inspired to come out to his family and teammates after spending time with several gay people in the world of sports in March.

Gordon made the announcement in interviews with ESPN and Outsports on Wednesday. Gordon said he gained confidence by seeing an NBA team sign Jason Collins, who became the league’s first openly gay player when he joined the Brooklyn Nets this season.

“I want to be myself,” Gordon said in the interview televised on ESPN. “I don’t want to hide and be someone I’m not.”

The sophomore was the Minutemen’s fourth-leading scorer with 9.4 points per game last season, when UMass reached the NCAA tournament for the first time since 1998. A transfer from Western Kentucky, Gordon played at high school powerhouse St. Patrick in New Jersey.

In the Outsports interview, Gordon said he considered quitting basketball last fall and isolated himself from teammates because of teasing. Over the summer, he had “liked” a photo on Instagram of him and his then-boyfriend in front of a gay bar.

“I just wanted to run and hide somewhere,” he said. “I used to go back to my room and I’d just cry.”

Gordon was also inspired by spending time with several gay people in the world of sports in March, according to the Outsports article, and decided to come out to his family and then the Minutemen.

Once he opened up to his teammates, they were encouraging. In the ESPN interview, he recalled that they told him: “We’re going to support you no matter what.”

“I have the most profound respect for Derrick and the decision he has made to come out publicly,” coach Derek Kellogg said in a statement. “He is a model student, a terrific competitor, but most importantly, he is a wonderful human being.”

UMass director of athletics John McCutcheon said in a statement that the department “is proud to have Derrick Gordon as a member of our athletic family and honor his courage and openness as a gay student-athlete.”

“UMass Athletics is committed to creating a welcoming climate where every student-athlete, coach and staff member can be true to themselves as they pursue their athletic, academic and professional goals,” McCutcheon added.

Kellogg told ESPN that he could already see a newfound happiness in Gordon.

“I haven’t felt like this. Ever,” Gordon said in the Outsports interview. “It’s a lot of weight lifted off my shoulders. I can finally breathe now and live life happily.”

Collins made a trailblazing announcement last April when he came out in an interview with Sports Illustrated. In February, he became the first openly gay male athlete in the four major North American pro sports leagues.

Michael Sam, an All-American defensive end at Missouri, came out in interviews with ESPN, The New York Times and Outsports in February after his college career ended. He is projected as a middle-round prospect in next month’s NFL draft.

Sam tweeted congratulations to Gordon after the announcement: “You have so many in your corner and we’re all proud and rooting for you.”