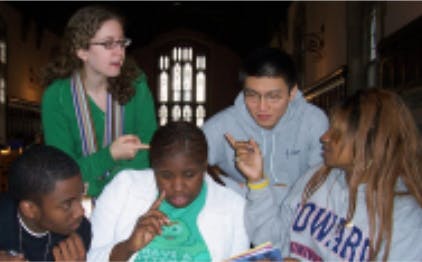 In the PUPP program, students spend several weeks working intensively at the non-residential summer institute followed by meetings during the school year.

Students who are at the bottom half of the socioeconomic pool make up only 10 percent of the student population at the 146 most selective colleges. Despite that seemingly dismal statistic, high-achieving, low-income students are more numerous than statistics indicate.

The Jack Kent Cooke Foundation’s report, the “Achievement Trap,” found that high-achieving, low-income students tend to fall into a trap in which educators and policy makers figure these students can fend for themselves. While they can overcome significant hurdles, they may still need support to obtain a college degree.

Several organizations have worked to have either a national or local reach to specifically give support to these talented students. At “Opening Doors and Paving the Way,” a forum in which 22 educators gathered to discuss how best to support high-achieving, low-income students, they found that strivers need four kinds of support for getting to and through college: academic services, personal development services, college advising, and mentoring. QuestBridge and the Princeton University Preparatory Program (PUPP) are offering many of those necessary services.

QuestBridge, a nonprofit organization based out of Palo Alto, Calif., is known for its National College Match program. High school seniors can apply to QuestBridge by filling out the program’s application. Students who are selected as QuestBridge finalists can then chose up to eight schools for an Early Action-like round of admissions. If there is a match and the school accepts the applicants, they are guaranteed a full scholarship. Students can also choose to apply to all 33 of QuestBridge’s partner schools through the regular decision process.

QuestBridge takes the burden of application fees and college tuition off the shoulders of its finalists and gives them room to really concentrate on their studies. With a web-based application, QuestBridge is able to reach thousands of high-achieving, low-income students each year.

CEO David Hunter declares joyously that he enjoys going through the applications each year. “So many of these students have such great stories,” he says.

Dr. Jason Klugman and his team have a more local focus with PUPP, which works with high-achieving, low-income high school students in the vicinity of Princeton, N.J., to impact their college prospects.

The idea behind this model is to “maintain the connections between home and community,” says Klugman, who adds that they want to build “scholarly behaviors and habits” without putting students in a bubble.

When asked about the challenges faced by his students, Klugman notes that the challenges could be “as mundane as being able to afford a trip home for breaks or a night out with peers or as deep as making decisions about special opportunities for study abroad or research.”

He has also found that there are “significant cultural challenges … that can impact low-income students.” He says they may not have exposure to communities outside their neighborhood, to ways of code-switching, or to the arts.

PUPP students go on several cultural excursions each year. Most recently, they saw the musical “Next to Normal” and have visited several museums in Philadelphia and New York City.

Both QuestBridge and PUPP have found that getting students into college is often not enough. They sometimes need additional support to make it to graduation day.

For PUPP, this support includes maintaining a connection with alumni of the program. This could be anything from Facebook messages to a care package. PUPP staff also provides information about summer opportunities and internships and is willing to write letters of recommendation for alumni.

QuestBridge offers similar supports to its finalists. Each of its 33 partner schools has a Quest Scholars chapter. These student groups are not only open to Quest Scholars but also to any first-generation or low-income students.

The groups get together for the holidays, which can be great for students who can’t make it home for Thanksgiving. At one school, 60 students showed up for the Quest Scholars Thanksgiving dinner this year.

These students have also joined forces to do volunteer work, including helping out in the aftermath of Hurricane Sandy. QuestBridge strongly encourages students to create and maintain these bonds with other students in order to help them get through those four years.