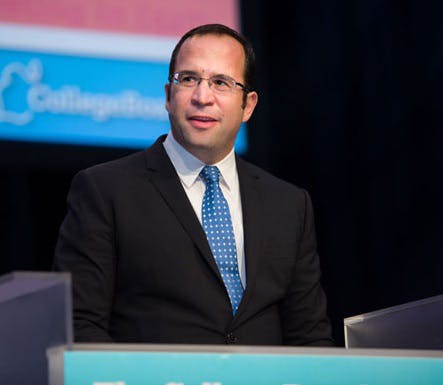 With the aim of increasing underrepresented minority and female participation in Advanced Placement (AP) STEM courses, the College Board has announced the launch of the AP® STEM Access program.

The initiative is targeting more than 800 public U.S. high schools to start new AP science and math courses while encouraging “traditionally underrepresented minority (Black/African-American, Hispanic/Latino and American Indian/Alaska Native) and female students who demonstrate strong academic potential to enroll and explore these areas of study and related careers,” according to the College Board, which administers the SAT and the AP course and exam program.

The AP® STEM Access Program is being funded by a $5 million grant from Google to DonorsChoose.org as part of the search engine company’s Global impact Awards. DonorsChoose.org and the College Board will be collaborating to work with AP teachers in participating schools to enable them to secure the classroom resources and professional development necessary to begin the new courses.

“Unfortunately, traditionally underrepresented minority students and female students often do not have access to AP STEM course work. We are very grateful to Google for its generous support and look forward to working with DonorsChoose.org,” David Coleman, the College Board president, said in a statement.

It’s widely known that traditionally underrepresented minority and female students in the U.S. are less likely to study science and math in college and to pursue related careers than their White or Asian American peers. This trend is partly wedded to the fact that underrepresented students typically have less opportunity during high school to experience demanding STEM course work.

The effort to create the AP STEM Access Program has been a “student-driven” effort with the College Board working with Google to identify the public high schools where AP STEM courses were not offered and there were sufficient numbers of underrepresented students attending the schools, according to Potoula Chresomales, the executive director of AP Strategy for product development and communications at the College Board.

“The College Board is doing the outreach,” while the funding “will be administered by DonorsChoose.org,” Chresomales says.

“Google cares very deeply about the STEM issue. (They) wanted to eliminate the barriers and the financial obstacles so that there’s money for textbooks and professional development,” she adds.

Participating schools are expected to launch the new AP science and math courses in fall 2013 and commit to offering courses for at least three years. The schools will be eligible to receive funding to start one or more new AP courses in STEM subject areas. Chresomales says the grants will be used by teachers for professional development and to acquire classroom materials, lab and technology equipment, college-level textbooks, and other resources.

The grants will range from $1,200 to $9,000, based on the subject of the new course. The College Board notes that, in supporting inclusivity and outreach, the AP STEM teachers who increase diversity in their classrooms will receive a $100 DonorsChoose.org gift card for each student who achieves a score of 3, 4 or 5 on an AP STEM exam. Teachers will be able to use the gift cards to invest in additional classroom resources.

“It’s too soon to tell what the demands will be” by participating schools to get new courses launched, says Chresomales, noting that College Board officials should have a clearer picture of “what the needs will be” by the end of February.

In at least one state, state education officials are working with local school districts to provide support for and awareness of the AP® STEM Access Program. Dr. Maria Pitre-Martin, the director of K-12 Curriculum and Instruction at the North Carolina Department of Public Instruction, says the Google-College Board initiative will complement an existing program the state coordinates with the University of North Carolina system that’s expanding AP course participation by minority students.

“We certainly consider equity to be an important goal here in the state of North Carolina and in our public school systems and this program represents an opportunity to address that particular goal,” Pitre-Martin says.

Forty-four high schools in 15 school districts qualify to participate in the AP® STEM Access program, according to the North Carolina Department of Public Instruction.