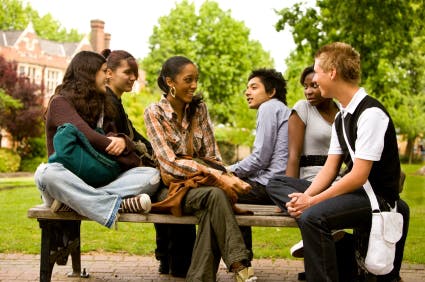 New survey reveals the top considerations for students enrolling in college for the first time.
The desires to get a good job and earn more money are playing historically high roles in incoming freshmen’s reasons for going to college. And the lack of money is also figuring more prominently in students’ choices of which college to attend.

Those are some of the key findings of a new survey released Wednesday by the Cooperative Institutional Research Program (CIRP), which is part of the Higher Education Research Institute (HERI) at UCLA.

Specifically, the survey found that when it comes to reasons to attend college, getting a better job rose to an all-time high of 87.9 percent. That’s up from 85.9 percent in 2011.

“In the minds of today’s college students, getting a better job continues to be the most prevalent reason to go to college,” the survey says.

Similarly, more students than ever — 74.6 percent in 2012 versus 71.7 percent in 2011 — cited “to be able to make more money” as a reason to go to college, catapulting this reason to the fourth-highest reason and surpassing “to gain a general education and appreciation of ideas,” which is now at 72.8 percent, according to the survey.

Similarly, 81 percent of incoming students said “being very well-off financially” was a “very important” or “essential” personal goal. This is also an all-time high, rising from the 79.6 percent who said this goal was important in 2011.

The survey also found that more students in 2012 believe that the current economic situation “significantly affected” their choice of college — 66.6 percent in 2012 versus 62.1 percent two years prior, when the question was first asked.

Kevin Eagan, assistant director for research at HERI, said rising tuition is among the top factors leading more students, particularly those who must rely upon student loans, to be more money-conscious and concerned with finding work upon graduation than in the past.

“As they spend more money to attend college, they’re hoping that they see that money come back to them in future earnings,” Eagan said.

Dr. Anthony P. Carnevale, research professor and director of the Georgetown University Center on Education and the Workforce, said that while the ultimate purpose of higher education in a democracy is to “empower people to live fully,” employability is similarly essential.

“Our students are telling us that if that if we don’t make them employable, we are unlikely to empower them as citizens and autonomous individuals,” Carnevale said of the CIRP freshman survey.

Money, or lack thereof, is influencing students’ decisions to go college in other ways as well. The survey found that more students — 43.3 percent — had “carefully considered” the cost of attending a particular college when choosing which college to attend. In 2011, the figure stood at 40.6 percent, and in 2004, only 31 percent thought cost was “very important.”

The survey also found that 13.4 percent of incoming freshmen reported that not being able to afford their first choice was “very important” in deciding which institution to attend. The survey says the figure is also at an all-time high since the question was first included in 2006, when it stood at 9.4 percent.

Beyond money considerations, the CIRP freshman survey also dealt with an array of items that ranged from shifts in political thought to gaps between when students think they would graduate versus when statistics suggest they actually will graduate.

· While most first-year incoming freshmen — 84.3 percent — believe that they will graduate from college in four years, “this will likely only come true for approximately half of them, as they are attending schools that, on average, only graduate 40.6 percent of their students in four years.”

· Business continues to be the most popular prospective major — 14.4 percent indicated plans to pursue a major in one of the 12 business majors listed. The next two highest prospective majors were in the health professions, with 14.1 percent, and the biological sciences with 12.6 percent. Engineering was close behind, the survey said, at 10.4 percent.