Food Pantries on the Rise at U.S. College Campuses 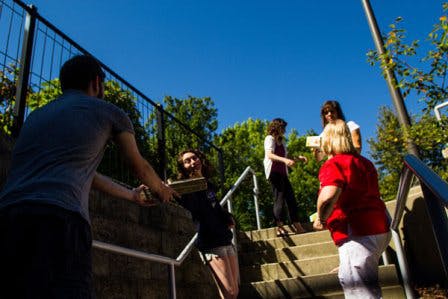 Officials at Stony Brook University opened the food pantry last year after learning that students had started a website sharing information about campus events where free food was being offered.

STONY BROOK, N.Y. ― Days after biology major Gillian Carll arrived at Stony Brook University last fall, she encountered a young woman on a bench outside her dormitory who said she had nothing to eat.

“I was just like, ‘Oh, my gosh!’ I didn’t know kids could afford to go here but couldn’t have mac and cheese or something like that,” said the Livonia, N.Y., freshman. “It was kind of unbelievable.”

Carll got the student some food from her dorm room and later volunteered at Stony Brook’s new food pantry ― one of dozens cropping up at colleges across the country in recent years as educators acknowledge the struggles many students face as the cost of getting a higher education continues to soar.

“The perception is of college students that if you are able to go to college and you have an opportunity to go to college, you’re part of the haves of this country, not part of the have-nots,” said Beth McGuire-Fredericks, assistant director for college housing at the Stony Brook campus on eastern Long Island and a co-founder of the pantry.

“How can someone who’s in college be someone who has a need like food?”

Tuition alone has become a growing burden, rising 27 percent at public colleges and 14 percent at private schools in the past five years, according to the College Board. Add in expenses for books, housing and other necessities of college life and some are left to choose between eating and learning. Also, most students enrolled in college at least half time are not eligible for food stamps.

“A lot of schools are coming to the realization that this is important,” said Nate Smith-Tyge, director of the Michigan State University Food Bank and co-founder of the College and University Food Bank Alliance, which represents about 50 college food banks across the country.

Most of them started in the past four or five years and are run by the colleges or student groups. Smith-Tyge estimates there may be another 50 food pantries on campuses that have yet to join his organization.

“That doesn’t surprise me at all,” said Richard Vedder, director of the Center for College Affordability and Productivity, a research organization that has linked the trend of rising college tuitions, in part, to higher personnel costs.

Vedder said it was a “little bit hypocritical” of colleges to say they are helping their students. “They wouldn’t need pantries if they hadn’t raised prices,” he said.

Clare Cady, a co-founder of the Food Bank Alliance and head of the Oregon State University food bank, said the profiles of recipients vary from undergraduate students who have opted for cheaper meal plans that give students fewer dining options to people dealing with unexpected economic hardships to students raising children while struggling to pay tuition.

“Some of these students are deeply committed to earning a degree and are making very difficult choices,” Cady said.

At Stony Brook, where the average cost for an undergraduate residential student ― tuition, fees, room and board ― is $19,358 a year, officials opened the food pantry last year after learning that students had started a website sharing information about campus events where free food was being offered.

“We were hearing rumblings around campus that said students were running out of meal points at the end of the semester,” said Casey McGloin, a food pantry co-founder.

“We wanted to serve both the students who were hurting in that they didn’t have enough to eat period throughout the day and also the students who could only afford to buy pizza or ramen,” she said.

When the doors opened last September, more than 50 students were waiting to be helped. The pantry, which is located in a dormitory basement, is open two nights a week. The pantry provided more than 500 bags of staples like pasta, fruit, vegetables, tuna, breakfast bars and other items in the first semester, McGloin said. Some students have opted to hand back some of the items in the bag, telling volunteers they only need a can of soup or other item to get them through the night.

Greeshma Johnson, a 19-year-old health science major from Queens Village, N.Y., said she opted for a less-expensive meal plan at Stony Brook to save money and uses the food pantry to supplement her dining options. “The food pantry allows us to have something extra in case you get hungry,” she said. “Every year, tuition gets a little higher.”

Support from the college community has been overwhelming; a food drive organized by student varsity athletes brought in more than 100 pounds of food last semester. The pantry has actually had to turn away some donations.

“We had to say we can’t accept any more; we didn’t have the space,” McGuire-Fredericks said. “We’ve had so many departments, organizations and clubs saying, ‘Let us know when you’re strapped again.’”