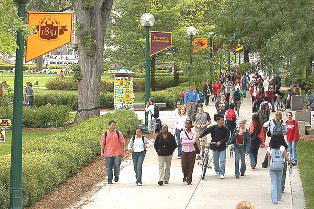 MINNEAPOLIS ― The University of Minnesota plans to boost its recruiting and retention efforts to counter declining Black enrollment in graduate and professional programs.

Blacks now make up 2.7 percent of all master’s and Ph.D. students at the university, down from 2.9 percent four years ago. The drop has been even steeper in professional programs such as law and medicine – from 3 percent to 2.3 percent.

University officials told Minnesota Public Radio for a story aired Friday that they’re at a loss to explain why fewer Blacks are studying for advanced degrees there.

“That worries us,” said Sally Kohlstedt, acting vice provost and dean of graduate education. “Across the country, there has been a drop in African-Americans. But we seem to be dropping even more rapidly than at the national level. And that raises a whole lot of questions.”

Some of the drop may be due to an overall decline in graduate enrollment of 9 percent in the past five years, but the university’s share of Black graduate students is about a quarter of that usually found around the country. According to the Council of Graduate Schools, just over 10 percent of graduate students in doctoral and master’s programs nationwide are Black.

The university appears to have trouble both recruiting and keeping Black graduate students. The Black undergraduate population also has dropped—from 5 percent of the student body in 2010 to 4.6 percent this year.

“The [university] seems to struggle with recruiting African-Americans at the undergraduate level—and getting those students to graduate,” said Robert Smith III, a Black graduate student in the American Studies program. “If that doesn’t happen, it’s going to be even tougher to have high graduate African-American enrollment.”

“Some of the steps that are being taken, to publicly and openly acknowledge that we are struggling, is a huge step,” he said.