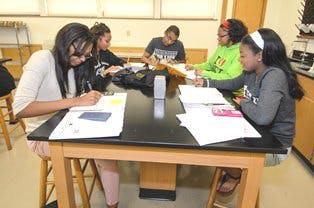 Students participate in one of the many summer programs that Xavier University has offered for more than 30 years.

NEW ORLEANS — As Michael Seaberry begins his first year of medical school at the University of Rochester, he can’t help but to reflect with great fondness on the institution that helped him to develop the skills and passion to want to become a physician.

Seaberry’s introduction to the STEM field came in high school, when he was selected along with dozens of others to participate in a summer program offered on the campus of Xavier University, the private Black Catholic college headquartered in New Orleans.

Not only did that summer program help Seaberry decide on a future occupation, but it also made deciding on a college to attend post high school graduation much easier.

“As soon as I got to campus, I fell in love with the university,” says Seaberry, a native of Lake Charles, Louisiana. “In fact, Xavier was the only college I applied to.”

As historically Black colleges and universities across the country continue to struggle over how best to recruit and retain students, Xavier has used its summer campus programs to create a direct pipeline for middle and high school students, exposing them to the campus and rigorous study as early as the 7th and 8th grades.

Now, other institutions are looking to replicate the program, arguing that if HBCUs are too be competitive in luring students to their campuses, they have to court students and their parents much sooner.

At Xavier, the summer program model is the brainchild of Dr. Norman C. Francis, the school’s president, who has presided over the storied institution for almost five decades and has become an active cheerleader for these kinds of initiatives.

“The future is very promising for Xavier,” says Francis, who excitedly summons a reporter over to his conference room window to point out a group of youngsters scurrying from the school’s cafeteria to biology lab on a recent afternoon. “Those are our students.”

Xavier officials say that the success of these programs is evident in the hundreds of student participants who decide to enroll at the university and who go on to pursue majors within the STEM fields.

“We are still No. 1 in the number of STEM graduates,” boasts Francis, who added that all rising high school seniors who participate in the summer programs complete an Xavier application, even if they have aspirations of attending another college or university.

The popularity of the school’s summer programs has drawn student participants to campus from as far as the West Coast. Xavier alumni who were students in the summer programs on campus often insist on enrolling their own children.

For Brandi Temple, the intensity of her classes during her four weeks on campus as a high school student convinced her that she didn’t need to apply elsewhere for college.

Now a junior at Xavier, she recently completed a competitive 10-week research stint at Johns Hopkins University in Baltimore.

“I definitely felt like Xavier prepared me,” says Temple, a Baton Rouge native who has plans to go on and earn an M.D. or Ph.D. when she graduates in 2016.

Damon L. Williams Jr., the former director of Xavier’s summer programs says that the success of these programs can be directly linked to the alumni who have go on to become change agents in their respective fields.

“These programs have created a pipeline of STEM students that have gone out into the world and have become successful professionals in their perspective areas all under the mission of Xavier to make the world a more just and humane society for all,” says Williams, an Xavier alumnus who was also a participant in the summer programs during his high school years and is now director of diversity, community and recruitment at the Laney Graduate School at Emory University. “These students matriculate into the landscape of college, graduate and professional schools and go back into the community to give back.”

On a recent afternoon, a group of Black high school males in the Stress On Analytical Reasoning (SOAR) program carefully listened as a guest speaker summoned them to study hard and take responsibility for their actions.

It was a transformative moment for one participant.

“This program saved my life,” he says with a broad smile. “I’ve learned more about myself and about my abilities since I’ve been here. Before I didn’t know if college was even possible for me.  But now, I know that it’s not only possible, but it is absolutely necessary.”