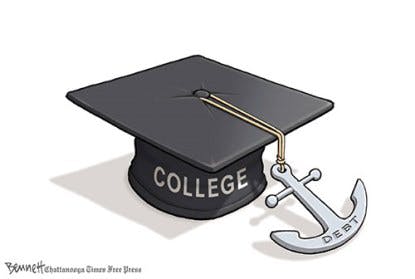 WASHINGTON — America’s $1.2 trillion in student debt is having consequences in far-reaching ways.

College dropouts and students who borrowed to attend for-profit colleges are at risk of default. Many Generation X parents—ages 35 to 50—are still repaying debt even as their children prepare to enter college and begin a second generation of family debt. Some millennials are delaying marriage and home ownership until their loans become less burdensome.

Three trends show how the pressures from student debt are compounding:

For people with college degrees but no graduate school education, incomes, after accounting for inflation, have declined, reducing their ability to repay their loans. For a 23-to-29-year-old with a college degree, median income in 2013 was $41,000. That figure has plunged $5,000 in current dollars since 2000, according to Georgetown University’s Center on Education and the Workforce. The drop reflects a trend dating to 1970 of stagnant income for the college educated with no graduate degree—evidence that the supply of these workers has roughly matched employer demand.

Median incomes have risen consistently for one group since 1970: Workers older than 30 with graduate degrees. But even those gains began stalling before the Great Recession began in late 2007.

A typical member of the class of 2013 graduated owing $27,300, according to the College Board. This figure has risen $5,000 in current dollars since 2000, a 22 percent jump. College grads who go straight into master’s programs often owe a combined $70,000 by the time they leave. Debt averaged $41,400 for a master’s degree, $71,600 for a research doctorate and $128,600 for a professional doctorate in medicine or law, according to exclusive Education Department data analyzed for The Associated Press.

When incomes fail to rise, every additional dollar in debt comes at a cost: A delay in major purchases, such as cars or homes. This can slow the economy because consumer spending drives about 70 percent of U.S. economic activity.

In 2013, college-educated heads of households under age 40 owed $4,850 in annual student loan payments, the Federal Reserve Survey of Consumer Finances shows. The figure has shot up by $1,090 since 2001 after adjusting for inflation.

The surge in student debt has coincided with reduced spending in other categories. Auto loan payments fell by nearly half from 2001 to 2013. Mortgage payments have also dipped, in part because of a lack of affordability in cities with many recent college graduates.