Not so long ago, officials at Delaware State University (DSU) — the lone historically Black college in the state — responded to dropouts and stop-outs in an after-the-fact manner.

“In the past we would sit around and wait until the semester’s end, and then everybody fusses and fights. 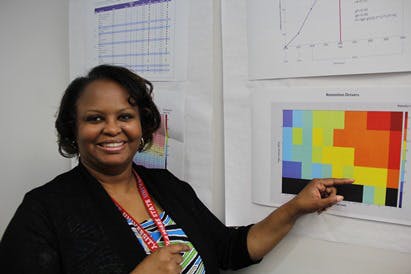 But DSU — which cut a series of low-enrollment programs earlier this year — can no longer afford to take that kind of approach, Williams says. Now, the school uses data analytics to flag not only when students leave the school, but to anticipate before they “stop out.”

School officials also use analytics to understand the reasons why and to figure out what, if anything, can be done to get them to stay or re-enroll and finish.

The work began in March 2014, when Williams established a data transformation team. The effort has since been bolstered by a $1.2 million grant from the Bill & Melinda Gates Foundation to retain low-income, first-generation students.

Using data analytics to retain students is about more than just helping students. It’s about enabling DSU to stay viable.

“In this day and age, we have to do that to be competitive and relevant, and if we don’t do it, we could lose out on some really good students because students have so many options on where they could go to school,” Williams says. “The schools that pay attention to them, those are the universities that are going to benefit and be around for a long time.”

Williams says the use of data analytics represents a radical departure from prior practice.

“The idea is to get over and across the finish line. That’s the goal.

We’ve been very successful [in] getting this data and making it clean and available for everybody.”

DSU is by no means alone in its efforts to use data analytics to try to keep more students in school.

For Williams, checking the reports generated by the data transformation team is part of his morning routine, which begins at 5:30 a.m. with a jog around campus.

Williams is referring to Teresa Hardee, senior vice president of finance and administration and chief operating officer at the school.

Hardee and her team wage their battle from Room 300 and 317 of the campus administration building.

“I call this the ‘war room,’” Hardee said during a recent visit to Room 300, the walls of which were blanketed with sheets of easel paper and colorful sticky notes — purple, pink, aqua and yellow — all with writings about things such as student housing, scholarships, tuition waiver deadlines and the like.

With laptops and notebooks out, the team discusses a document titled “Fall to Spring Retention Analysis.” The report indicated that 63 students who began at DSU last fall were no longer enrolled that spring.

Of those 63 students, 18 had left the school for possible financial reasons and 34 had left for academic reasons. Another 11 left for reasons unknown. The school had a total of about 4,500 enrollees.

“When I look at the spring population, a lot of it is GPA,” Hardee observes. “It doesn’t look like it’s money because the balance is not that high,” she says of the reasons why the students apparently left.

Indeed, the average fall balance for the 30 in-state students who had dropped out was $184, although it was significantly higher — $1,053 — for the 33 out-of-state students.

The average fall balance for all students was $639. “So something is going on with the classes,” Hardee says.

Hardee makes mention of the need to review these students’ individual development plans, or IDPs, in order to discern what is going on in their academic lives and what, if anything, the university employees who teach them and advise them did to keep them on track.

“What I would like to do, I want to list these students by name and go against the IDP to see what advisers did with these students, because intervention should happen along the way,” Hardee says.

“We’re likely losing these students to academics, not money.” Each student’s departure not only threatens to drag down DSU’s retention and graduation rates — figures that are crucial to defining an institution’s success and, in turn, shaping its reputation — but could also reduce revenue from tuition and thus affect the overall robustness of the institution.

Thus, what takes place in Room 300 and 317 is not just about DSU helping students — it’s about DSU helping itself, says Dr. Daniel Greenstein, director of Education, Postsecondary Success in the United States Program at the Gates Foundation.

He says DSU is “the first place I think that I encountered — and now you see it more and more — a leadership team that recognized that their student success was also tied intimately to the university’s own success, its own financial survival.”

Indeed, when DSU “deactivated” 23 low-enrollment programs earlier this year, the savings — expected to total $900,000 by 2020 — were redirected toward the data analytics effort.

“We need to be clear on the funds cut from classes,” says board chair David G. Turner. “That got cut and is going to this effort.”

There could be substantial payoffs in the long run if retention trends at DSU continue.

“The increase of second year retention to 76 percent in 2017 and 80 percent from 2018 on will lead to an additional increase of income of $2.7 million in 2022,” Hardee wrote in July in a follow-up email to Diverse. “This is equivalent to approximately $2,700 for each incoming freshman.”