In order to diversify the workforce of the aerospace and defense industries, business and higher education leaders must be proactive and intentional about collaborating to provide more opportunities to students from underrepresented groups. 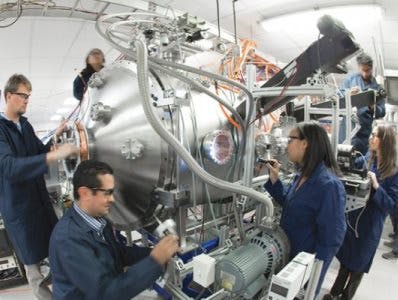 That was the heart of the message that a series of speakers delivered Wednesday at the 2016 National Aerospace & Defense Workforce Summit, convened by the Aerospace Industries Association (AIA) and the American Institute of Aeronautics and Astronautics (AIAA).

“A truly robust STEM development ecosystem requires proactive steps from educational leadership on the one hand and business leadership on the other hand,” said Richard Celeste, co-chair of the National Academy of Sciences Committee that produced the 2016 report, “Promising Practices for Strengthening the Regional STEM Workforce Development Ecosystem.”

Celeste, who is also a former governor of Ohio and former president of Colorado College, said it’s important to look at employment in the aerospace and defense industries from a regional perspective as opposed to a national one, because hiring is ultimately a local function and the needs of business vary from one region to the next.

“Many of those with degrees lack the right combination of what we call technical skills on one side and employability skills needed to thrive in the workplace,” Celeste said.

“People need to be skilled at teamwork, flexibility to think beyond a discipline,” Celeste said. “There are critical skills that go with that.”

Celeste made his remarks during a panel discussion that featured industry partnerships with higher education. One of the major objectives of the summit was to help develop a vision for developing STEM talent for the next administration.

Christopher C. Valentino, director of strategy and technical fellow in the Cyber & Intelligence Mission Solutions Division at Northrop Grumman Mission Systems, gave an overview of an initiative that is part of a partnership between Northrop and the University of Maryland at College Park.

The initiative is known as ACES—an acronym for Advanced Cybersecurity Experience for Students—and is considered to be the first and only full four-year honors undergraduate program in cybersecurity. It is a “two-plus-two” program that involves a two-year “living-learning” component and a two-year advanced program of study in cybersecurity.

Valentino said one of the lessons learned from the initiative is that there’s a need to provide meaningful workforce experience to students early since many were being lured away to other locales and regions—such as the West Coast—that are teeming with opportunities.

“In some cases they were exiting the region before they finished undergrad,” Valentino said.

Now, he said, the initiative involves “approaching talent earlier instead of waiting for them to mature.”

“For us, from a talent perspective, we’ve shifted to freshman or pre-freshman year as far as long-term plans and getting them internship experience,” Valentino said.

He added that ACES has become more deliberate about measuring and achieving better representation among underrepresented groups.

“We created a set of goals and metrics and recruited against those,” Valentino said. “We went from less than 30 percent underrepresented students to 40 percent with the current class of students,” he said, noting that the program started with 48 students and now has 250.

Brian Fitzgerald, CEO at the Business-Higher Education Forum—a membership organization of Fortune 500 CEOs and college and university presidents—said higher education represents the “highest leverage point” for tapping STEM talent because roughly half of all STEM majors choose another major before their junior year.

“Focusing on that is the most efficient and rapid way to address STEM workforce needs,” Fitzgerald said. “If we can keep those students in those majors, in four years we have new STEM workers. All of the other points in the pipeline have longer times in between the intervention and producing STEM graduates.”