The number of international students at U.S. colleges and universities has hit a record high, but experts suggest that Donald Trump’s election may slow the growth of this market — and threaten the estimated $35 billion it adds annually to the American economy.

For the first time, the number of international students at U.S. universities exceeded a million last year, according to new figures from the Institute of International Education. The total of about 1,044,000 was up 7 percent from 2014-15. 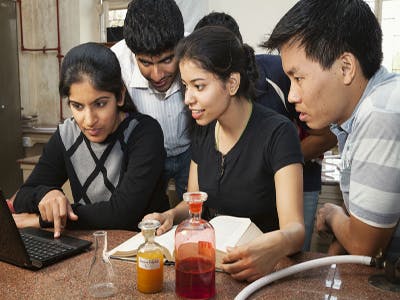 China and India remained the top two sources of international students, but Saudi Arabia —  bolstered by a government-funded scholarship program — passed South Korea to pull into third on the list.

After a caustic presidential campaign and Trump’s vows to limit immigration, build a Mexican border wall and force Muslims to register, some in higher education are bracing for a backlash among students who see the United States as a less-welcoming destination.

If the rise of post-Brexit anti-foreigner attacks in Great Britain is any indication, they say, Trump’s presidency —  and its possible policy implications—could lead international students to look elsewhere for their educations.

A survey of international students earlier this year revealed serious concerns about a Trump presidency. The March poll of 40,000 students in 118 countries by two international student recruiting firms found 60 percent of respondents were less likely to attend U.S. universities if Trump were elected, compared to 3.8 percent who felt that way about Hillary Clinton.

“It seems as though there could be the beginnings of a sea change here,” he said. “The results of Brexit and the U.S. election definitely put a message out there.”

In Mexico, about 80 percent of survey respondents said they would be less likely to attend U.S. universities during a Trump presidency. The country sent nearly 17,000 students to the United States last year.

The two companies plan to complete another survey soon to see how the election is influencing college choices, Waxman said.

Saudi Arabia alone sends more than 61,000 students each year to the United States, which Trump suggested during his campaign should ban Muslims from entering.

Sharp declines have occurred before, in response to changes in tone in other countries. The number of Indian student visa applications in Australia, for example, fell by 46 percent immediately following attacks on Indian students in that country in 2009.

The U.S. business of educating people from abroad is also facing other challenges, including the economic slump in China and a building spree in India, which is establishing 278 new universities that might keep some of its students at home who previously might have come to the United States.

International students at U.S. universities add $35 billion a year to the economy.

A drop-off in U.S. international enrollment, which has increased 85 percent in the past decade as universities aggressively recruit abroad, could have significant financial repercussions. International students pumped $35 billion into the country’s economy in 2015, according to the U.S. Department of Commerce.

Much of the money from full-tuition-paying international students serves as an important subsidy for American undergraduates. Some public universities, including Arizona, Ohio, Michigan and Pennsylvania states, Purdue and the University of Wisconsin, have even added a surcharge to the price for international students to make up for budget cuts.

Other countries appear glad to pick up the slack.

Canadian universities, for example, stand ready to accept students who previously may have considered the United States, said Pari Johnston, a vice president with Universities Canada.

“It seems like students from other countries are assessing their options,” she said. “Canada is a very multicultural, open country.”

Not everyone is worried.

“I don’t expect the basic conditions which cause international students and their families to come here to change,” said Allan Goodman, CEO and president of the Institute of International Education. “People will still want that ‘made in the USA’ diploma.”

This article was first published by the Hechinger Report.