A new report from a bipartisan task force concludes that “education is key” to helping bring stability to Syria, Iraq and other troubled nations, many of who’s most promising young people have fled. 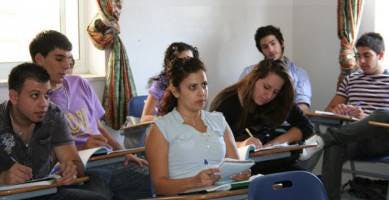 Addressing this, the report says, is essential not only for the Middle East, but to improving the lives and livelihoods of Americans by curbing terrorism and the spread of weapons of mass destruction and protecting the economy.

It warns that the incoming Trump administration will have to deal almost immediately with the Syrian crisis, and should do so with a strategy that encompasses multilateral actions including the strengthening of opposition forces.

But the report says the approach must also include “unlock[ing] the region’s untapped human capital,” especially among young people and women.

One of the least-noticed effects of the wars in Syria, Iraq and elsewhere is that they have interrupted the higher educations of huge numbers of students, including the many who have fled. Barely 1 percent of college-age refugees are in university courses, compared to the global average of 34 percent, the Institute of International Education, or IIE, estimates.

In Syria alone, which 4.8 million people have now left, an estimated 210,000 students were enrolled in college when the civil war began. Only 1.4 percent of worldwide humanitarian aid goes to education of any kind, according to the United Nations Educational, Scientific, and Cultural Organization, or UNESCO.

Many of those students are now in Germany and other countries, crowding into university courses and contending with language difficulties and other problems. Hardly any have been accepted into the United States.

The Atlantic Council report suggests other ways of serving them, such as online and through exchange programs.

That would help produce problem-solvers, badly needed entrepreneurs and critical thinkers who would understand the facts and resist extremist appeals.

Better-educated people “can be the engines of job creation, help motivate the broader population, and innovate solutions to the region’s economic and social problems,” the report says.

The United States and other countries should do this “not as an act of charity or as a favor to the region,” it says, “but because it is in their own national security interests to do so.”