Several college presidents sprang into action over the weekend, reassuring their students who are from the seven predominantly Muslim countries that President Trump temporarily banned from entering the United States that they would do everything to support them in these uncertain days. 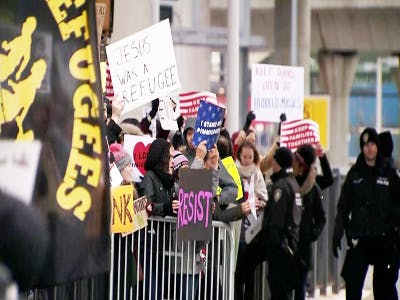 Protestors rallied over the weekend at JFK International Airport in New York.

Wilson encouraged students who hail from those countries to “delay any plans you have to travel internationally until we are able to get more clarity on President Trump’s order.”

On Saturday evening, a federal judge issued a temporary stay, prohibiting federal officials from sending the detainees with valid visas from being returned to their country of origin. It is unclear if all of those who were detained throughout the country were released and it is unclear how long the temporary stay will remain in effect.

Still, throughout the nation, thousands descended onto airports located in major U.S. cities like Los Angeles and Dallas over the weekend to express dismay over this latest policy by the Trump administration.

At John F. Kennedy International Airport, the protestors were holding signs and chanting, “Hey, hey, ho, ho, Muslim ban has got to go.”

In New York, Dr. Vincent Boudreau, interim president of The City College of New York (CCNY) in Harlem, took to Twitter to encourage any CCNY student denied entry into the United States to contact him directly.

Meanwhile, officials at the University of Michigan announced that they would not release the immigration status of their students to federal authorities. In a statement, the university reiterated their policy on nondiscrimination, privacy and public safety.

“The University of Michigan welcomes and supports students without regard to their immigration status,” the statement read. “We will continue to admit students in a manner consistent with our non-discrimination policy. Once students are admitted, the university is committed to fostering an environment in which each student can flourish.”

Several college presidents said that they were caught off-guard by Trump’s directive and will continue to monitor the court proceedings and advise their students accordingly. However, for many international students who have already felt uneasy about the status of their future in the United States in the wake of Trump’s election, administrators have also been making the rounds to reassure them that they will fight to ensure that they will remain at the institution.

“I often write to you to remind you of the values we hold high at Morgan,” wrote Wilson. “We are a wonderfully diverse community and value the diverse faiths represented on campus. We do not discriminate against individuals based on their religion, gender, ethnicity, race, sexual orientation, or any other protected characteristics.”