WASHINGTON — Although Betsy DeVos narrowly clinched the confirmation she needed Tuesday to head the U.S. Department of Education, questions about what direction she will take the agency — as well as her higher education agenda — are likely to remain unsettled until key agency posts are filled.

That is the take of several higher education stakeholders and observers who commented on her controversial ascendancy to the cabinet post Tuesday amid widespread vocal opposition and skepticism that is not likely to abate anytime soon. 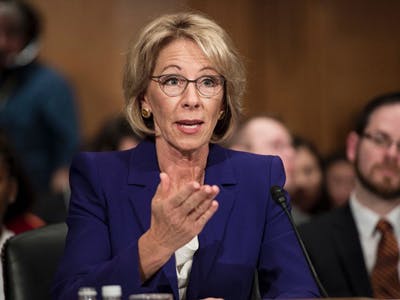 “I think we’re going to be entering a period of uncertainty and change with respect to federal regulation of colleges and universities,” said Terry Hartle, senior vice president of governmental and public affairs at the American Council on Education.

“What I don’t know is how quickly we will see those changes simply because the political appointees are not all in place at the Department of Education.”

Hartle said he thought that the rocky rollout of the Trump administration’s travel ban on refugees would make the Education Department more circumspect about implementing any changes. In addition to sparking massive protests, the travel ban ran into legal trouble from the start and its fate is currently pending in federal court.

“One of the results of the controversial executive order on refugees and visa holders is broad appreciation of the challenges that result when implementation is mishandled, and so I think that all agencies will be looking for ways to streamline federal regulations. But I suspect they’re going to do it in a careful and thoughtful fashion so they don’t take steps that haven’t been all the way thought through,” Hartle said.

DeVos’ predecessor — former U.S. Secretary of Education John B. King Jr. — said in a statement Tuesday that “concerns remain” about DeVos’ commitment to “fully embracing public education and to using the full range of tools at the Secretary’s disposal to protect and advance opportunity and achievement for low-income students, students of color, English learners, and students with disabilities.”

Critics have seized on DeVos’ initial statement during her confirmation hearing last month that enforcement of the Individuals with Disabilities Education Act, or IDEA, should be left to states although it is a federal law. DeVos has since modified her position and indicated that she is aware that IDEA is a federal law.

She has also been criticized for her lack of commitment to maintaining certain data collecting functions, among other things, of the Education Department’s Office of Civil Rights.

“As the former Secretary of Education, I sincerely hope that Ms. DeVos will work hard to prove these concerns wrong and will lead the Department in a manner that protects fundamental civil rights and promotes opportunity and achievement for all students,” said King, who is incoming president at The Education Trust, an organization that advocates for closing gaps in achievement that affect low-income and minority students.

King said Ed Trust would work with DeVos and “support her wherever we can find common cause,” but would also “vigorously oppose any action that would undermine continued progress for the children on whose behalf we work every day.”

Dr. Michelle Asha Cooper, president of the Institute for Higher Education Policy, said it will be “important for higher education advocates to work alongside DeVos and others to ensure that we continue to make progress on efforts to improve college access and completion, especially for underserved students.”

“I am most interested in seeing reforms that will make college affordable, close attainment gaps, and ensure quality educational and workforce outcomes,” Cooper said.

However, she added: “Now is not the time to introduce policies that prioritize private industry and institutions over the needs of today’s college students.”

Asked to elaborate, Cooper said, “Because it would undermine efforts to educate and strengthen the talent needed to sustain and grow the workforce.”

DeVos has declined to commit to enforcement of the gainful employment rules implemented under the Obama administration, saying only that she would “review” the rules once confirmed.

Olympia Duhart, professor of law at Nova Southeastern University Shepard Broad College of Law, sounded a similar tone regarding the impact that she feared DeVos is likely to have on how campuses deal with sexual assault.

Duhart has criticized DeVos for her lack of “a firm commitment to using Title IX to respond properly to sexual assault on college campuses.”

“Ms. DeVos knows now that people are concerned about her weakening the protections of Title IX,” Duhart said of the 1972 law that is meant to protect people from discrimination based on sex in education programs or activities that receive federal financial assistance.

“I hope she proves us wrong,” Duhart said.

Others raised questions about DeVos’ ability to be effective given the widespread opposition to her confirmation.

“Hanging in there by the skin of your teeth is one thing, but what can anyone accomplish in the face of so much opposition and mistrust?” tweeted Barmak Nassirian, director of federal relations and policy analysis at the American Association of State Colleges and Universities.

Apprised of former Secretary King’s remarks about his “hope” that DeVos would prove her critics wrong, Nassirian quipped: “Hope springs eternal, but people rarely abandon long-held consistent beliefs overnight. Her past is prologue.”

DeVos — a billionaire philanthropist who has served stints as chair of her state’s Republican Party — has been criticized for using her wealth to advocate on behalf of charter and voucher schools, often, her critics charge, with no accountability for those schools in her home state of Michigan. Her supporters, on the other hand, have said she deserves credit for using her wealth to provide educational options for low-income families who would otherwise be relegated to sending their children to low-performing public schools.

Ulrich Boser, senior fellow and K-12 education expert at the left-leaning Center for American Progress, said he had no advice to offer DeVos because he thought she was “the wrong pick for the job.”

“I think we should give everyone the benefit, assume that everyone has good intentions, but this is a woman who comes from a huge amount of wealth made on Amway,” said Boser, who dismissed Amway as a “pyramid scheme.”

“It hasn’t been prosecuted as such but if you look at the evidence, it’s no different than Ponzi’s invention,” Boser said. “I’m really skeptical she’s going to put anything in place that has students and middle-class families at the center.”

DeVos’ confirmation was hailed by the National Alliance for Public Charter Schools, which congratulated DeVos and said she would “put students and families first.”

U.S. Sen. Tim Scott, R-S.C., said those who feared that DeVos would privatize education had nothing on which to base their fears.

“The secretary of education cannot privatize education,” Scott said moments before the Senate voted — almost entirely along party lines — to confirm DeVos as secretary of education. Vice President Mike Pence — in what was widely described as a first for a cabinet secretary confirmation — voted to break a 50-50 tie in which only two Republicans joined Democrats, who all voted against DeVos’ confirmation.

White House press secretary Sean Spicer said Tuesday that Democrats were being “childish” and engaging in obstructionism that voters will not forget by going against DeVos.

Richard D. Kahlenberg, a senior fellow at The Century Foundation, said the fact that Pence was needed to “drag Betsy DeVos over the finish line — something that no vice president in history has ever had to do for a cabinet appointee — is testimony to how damaged her reputation is.”

“Fundamentally, Americans believe in public education and do not want any part in DeVos’ privatization efforts,” Kahlenberg said.

“Every single Democratic senator and two brave Republicans voted against DeVos because they don’t want education in this country privatized,” Kahlenberg said. “Those senators understandably moved to block a private school voucher supporter who displayed a shockingly low understanding of public education.”