When Erik Gerding, associate dean for academic affairs and professor at the University of Colorado Law School, found out that one of his colleagues at the school had been nominated for the Supreme Court of the United States, the first thing he did was call him to discuss security and advise him that journalists were roaming the building and asking students to “report on his whereabouts in real time.”

“I was struck that his first and overriding concern was for the welfare of students,” Gerding recalled of Judge Neil Gorsuch, President Donald J. Trump’s nominee for the Supreme Court. 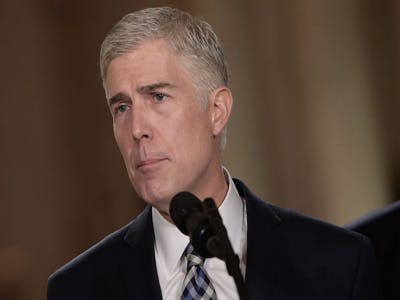 “He didn’t want his potential nomination and the media circus to disrupt the classroom experience of his students,” Gerding said.

“When the vetting process heated up, I am sure he had many other things to worry about,” Gerding continued. “But he continued to teach. He worried about and helped arrange for another seasoned faculty member to be ready to teach his class should the nomination become a reality.”

Gerding said Gorsuch “demands a lot of students in the classroom and models how to analyze legal problems from all angles.”

Similar descriptions of Gorsuch are not hard to find among students at the law school.

“Judge Gorsuch was challenging and pushed students to think critically about ethics in our profession,” said Oscar Cobos, a University of Colorado Law School student who took a class on legal ethics with Professor Gorsuch last semester.

“It was critical that students be prepared for class as he liked to engage with students,” said Cobos, who is treasurer of the Latino Law Students Association and co-president of the Spanish Speaking Law Student Association.

“I may not agree with all of his decisions but I think his credentials speak volumes and know he will do a great job if he is confirmed,” Cobos said. “He will surprise people in a good way.”

When President Donald J. Trump disparaged a judge who issued an adverse ruling against his travel ban by calling him a “so-called judge,” Gorsuch stated that such attacks were “disheartening” and “demoralizing.”

Cobos said he was glad to hear Professor Gorsuch’s response but not surprised.

“He truly cares about this profession and it shows in his teaching,” Cobos said.

Gorsuch —  a judge for the 10th U.S. Circuit Court of Appeals — has been a visiting professor at the University of Colorado Law School since 2008. Gorsuch has taught ethics and antitrust law at CU Boulder, typically teaching one course per semester through the Thomson Visiting Professor porgram, which brings leading experts from academia, the judiciary and legal practice to campus to teach classes in areas of key concern for law students, according to the university.

Colorado Law Dean S. James Anaya said Gorusch “adds a great deal to the educational experience by adding to the diversity of experiences and perspectives of those who are in the ranks of those teaching here.”

Gerding said the nomination process will be a “fantastic teaching moment for students.”

“They will be able to see one of their own faculty members go through the most intensive scrutiny of his writings and philosophy,” Gerding said. “Any Supreme Court nomination is high legal and political drama.

“But the front page legal controversies of the last few weeks underscore how important an independent judiciary is in a constitutional democracy,” Gerding said. “We’ve seen just how much the law and lawyers matter.”

Gerding said the law school has had a number of community discussions or “teach-ins” discussing the immigration orders of President Trump.

“We are planning more events to discuss other major policy changes announced by the new Administration, and we will have a similar forum to talk about the stakes involved in the Supreme Court nomination,” Gerding said.