Scholars: At its Core, Feminism Universal

WINSTON-SALEM, N.C. — Black transnational feminism. It’s a loaded phrase that most people don’t hear every day, even on a college campus.

Winston-Salem State University hosted a panel at its Diggs Gallery recently called “Transnational Black Feminisms: Black Women’s Activism in Brazil and The Americas.” The panel, which consisted of two invited scholars and two on-campus scholars, explained the idea behind the seemingly lofty language and how it is not only applicable but necessary in today’s world.

In short, Black transnational feminisms simply means understanding the ways in which Black women across nationalities are faced with many of the same issues. For example, women in Rio de Janeiro may not speak the same language as women in Ferguson, Missouri but they often experience the same issues. 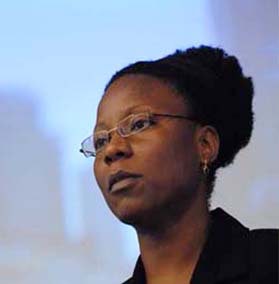 Dr. Keisha-Khan Perry explained that in the year 2016 alone, 11,106 Black people were killed by the police across Brazil. And even though the bulk of those were men, the effect on women was tremendous as well.

“And those were just the instances that were reported as being acts of resistance. Of resisting arrest.” Perry told the audience. “That’s not to diminish our experiences as here in the United States, but understand who is left to pick up the pieces in those moments, even when they are majority of Black men between 15-29, are Black women, mothers, sisters, daughters girlfriends and wives.”

One of the barriers in advancing the idea of Black transnational feminism is the last of the three words, “feminism.” Dr. Kia Caldwell talked about how resistance to the term in the Black community often keeps issues that need to be addressed from being spoken out on, such as Black women being killed by police.

“Black women are often marginalized within our communities, because of patriarchy and sexism and racism,” Caldwell said. “So I think having this type of conversation is so essential. Having it an HBCU is so essential in order for us to move our community forward.”

WSSU’s Dr. Michele Lewis agreed that the term “feminism” is still a barrier itself for many people due to misconceptions about its very definition.

“You still have a number of who believe that word means you hate men,” Lewis said. “And some of that is that whole psychology about how people use language and perhaps having deep discussions about how even trying to stigmatize the word ends up blocking people from wanting to call themselves that.”

And then, there is the stigma that comes along with the word Black.

Before she became a professor at WSSU, before she got her Ph.D., Dr. Uchenna Vasser was a student who decided she wanted to write about an Afro-Columbian writer. Her instructor rejected that notion not once, but twice.

“She goes, well you don’t want to do that, because you happen to be in the U.S. and you don’t want to be pigeonholed,” Vasser told the crowd. “So studying Black, being Black means you are now compartmentalized into something that may not allow you to go beyond a particular barrier.”

Vasser, who is Nigerian, rejected that notion then and she encourages others to do it now.

“If you actually want to talk about it, if you want to study it, I think it’s important,” she said.

When it all comes down to it, the panel’s message was that there is a link between the issues of women across the African diaspora, from Brooklyn to Brazil. Caldwell pointed out that has been the case long before the term Black transnational feminism came into play.

Caldwell said that health care is one of the many facets of life which have contributed to this sterilization. She did note that the Affordable Care Act was a step in the right direction.

“The health system is one of the major ways that we’re being eliminated and dying unnecessarily and being sterilized and not reproducing the population in this country,” she said. “And this is a struggle that’s on-going in Brazil as well.”