The Texas Legislature approved a bill on Monday that would allow more community colleges in the state to offer four-year degree programs.

“We think that that will provide a pathway for some of the poorest students in the state to achieve baccalaureate degrees,” commissioner of the Texas Higher Education Coordinating Board (THECB) Dr. Raymund A. Paredes said in a call with the press on Tuesday. 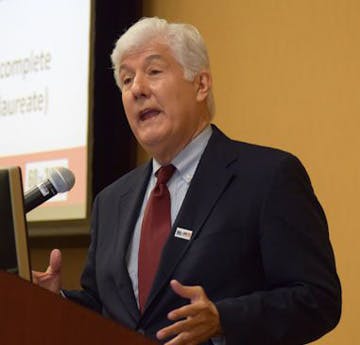 Although those three schools are authorized to offer up to five bachelor’s programs, none have hit that upper limit so far. South Texas offers four baccalaureate programs, Midland offers one, and Brazosport recently proposed a second degree.

“That shows that in fourteen years, none of the three institutions have reached their maximum allotment of programs,” Paredes said. “We think that indicates that community colleges understand that it is difficult to mount these programs. It indicates that community colleges want to stick to their core mission of associate’s degrees and certificates.”

So far, 10 community colleges have indicated interest in submitting proposals that would allow them to develop a four-year degree program.

Facing a budget crunch, the legislature was considering budget cuts across the spectrum of public colleges and universities earlier this year. By and large, public higher education in the state evaded those sorts of cuts, Paredes said on Tuesday, and community colleges even made gains in certain performance-based allocations from the state.

In addition, the legislature was eying a bill that would have frozen tuition for the next two years and capped its growth in subsequent years. Although the bill did not pass, it signals broader concerns in the state about balancing affordability and institutional revenue.

“I think that there is a lot of concern in the legislature that we’re reaching the breaking point in terms of maintaining accessibility to higher education, particularly at universities,” Paredes said.

“I think the [legislature’s] going to watch how much expansion we have of these kinds of programs in order to determine what might happen next session,” Paredes said.