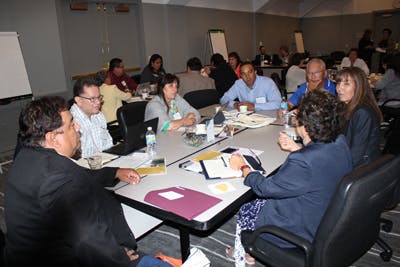 Tribal College and University presidents engage in a group discussion.

The session speakers and tribal college leaders discussed various ways to measure the value of college, closely examining the need for better academic advising, for more minority teachers that reflect their student populations, and for more institutional visibility to keep college completion and employment in mind for tribal students.

Dr. Dhanfu Elston, vice president of strategy, guided pathways, and Purpose First at Complete College America, started by stressing that TCUs must first have direct pathways for students to be successful in their academic journey, including making sure that students take at least 30 credit hours each year to graduate on time.

Elston said that at-risk and first-generation students generally have too many choices for selecting a major with few “guardrails to prevent poor choices.” Institutions can help redirect students by helping them identify potential career options early in their freshman year, he said.

Faulty academic advising — which can reach ratios of one advisor for every 1200 students at some institutions — is a problem at some institutions, he said. And with limited resources, institutions such as TCUs can change the role of advisors from being merely a scheduler, to “facilitators of purpose,” Elston said.

Several presidents reiterated that TCUs are often isolated and underfunded, but that their resilience in stretching those resources makes all the difference for their students. Still, it is a lot of “pressure and stress,” said Dr. Cynthia Lindquist, president of Cankdeska Cikana Community College.

Elston replied that each school could customize these strategies on a “scalable level” to meet the population that the institutions serve. When advisors integrate career assessment and counseling, provide real-time labor and job data and inform their students on the return on investment of their chosen career path during the “on-boarding” and early summer months, there will be quantitative data to show decreases in major switching and less students registered as “undeclared majors,” Elston concluded.

“You want to use the data to drive the change,” Elston said in his presentation. “Then embed it with some policy” within your institution’s academic planning for student support, he added.

Data gathering and assessment were integral components at the convening, and research studies and surveys presented showed how each TCU president could restructure strategies to bridge the gap of student competencies and workforce preparedness.

Through the partnership, more than 2,500 U.S. adults whose highest degree earned was the associate’s degree, were surveyed to assess their overall well-being after college based on five elements—purpose, social, community, physical and financial well-being.

“Tribal college leaders should survey their alumni to gain insights into whether they have benefited from their college experiences,” Esters said. “Doing so can help institutions identify ways they may more effectively collaborate with employers to align graduates’ skills with workforce demands.” Esters noted that this is especially important based on a projection for 2020 showing that all jobs will require a postsecondary education and training beyond high school.

Jobs on reservations, however, were mostly aligned with the tribal government or economy’s needs, one TCU president said. Identifying several risk indicators for tribal students — such as attendance, social support or academic preparation — was necessary for the tribal college leaders to redirect their support programs so that their students could complete their degrees, according to Dr. Ross Markle, senior assessment strategist at ETS.

A key step TCUs can take, Markle said, is shifting the conversation from a student’s background to their behavior. This includes looking at their non-cognitive skills such as goal-setting, self-efficacy and study skills as factors in predicting retention and degree completion.

These factors can be measured in a “holistic assessment solution” tool like ETS’ Success Navigator, which also aligns with Purpose First pathways and advising transformation to tailor student interventions based on their specific strengths and challenges, Markle said. He suggested that institutions should not “demoralize students and create a self-fulfilling prophecy.”

“One of our advocacy goals is to raise awareness of the challenges that our Native American communities face in education and to provide support to help mitigate those challenges,” Lenora Green, executive director of the ETS Center for Advocacy and Philanthropy, told Diverse. “When we support our tribal colleges and universities, we support the students they serve.”

Other ETS presenters discussed the role that Praxis plays in establishing a teacher pipeline, and how TCU leaders can better recruit and retain Native American teachers for their students. Blackfeet Community College, led by Dr. Billie Jo Kipp, reported that its faculty demographics are majority native, despite many other institutions having more non-native teachers.

Dr. Laura Goe, research scientist for student and teacher research at ETS, suggested reframing the question, “Why aren’t there more minority teachers?” to “How do you get kids to want to be teachers?”

While the answer to this question involves providing financial and mentoring support, TCU presidents shared experiences shedding light that the teacher pipeline system is challenging and afflicted with “overt racism” even with the support.

“You can have amazing teachers, but if the system does not want them,” they will not succeed through the education preparation program, Dr. Sandra Boham, president of Salish Kootenai College, said. Dr. Cheryl Crazy Bull, from the American Indian College Fund, added that “state resistance is high” when trying to get culture-based teachers into the system.

Contrarily, Dinè College and Blackfeet Community College showcased that it sometimes takes internal strategic planning and initiative to get faculty that are best culturally suited for their students. Blackfeet, with the help of a teacher grant, targeted and hired teachers who served for 10 to 20 years as teacher aides because they were committed to the tribal community. Dinè College’s leaders went to five sites across the reservation to meet with the best teachers in certain disciplines to train and share best practices with faculty.

Other programs including Teacher Core, Upward Bound, and Teach For America are starting places for Native American teachers looking to serve their indigenous populations, some TCU presidents pointed out.

The closing keynote session, led by Richard Lui, journalist and anchor for MSNBC and NBC News, encouraged the tribal college leaders to be proactive in their efforts to have their institutions’ and their students’ stories heard.

Attempts to share a story amidst political angst for Native Americans in the country should not be stifled, Lui recommended. “Walk through the door and bring it all,” he said. He also suggested hiring a journalist for each institution, creating a blog to control the narrative at each school and even partnering with news organizations to get students involved in telling their stories.

Dr. Paul Robertson, president of Tohono O’oodham Community College said that a problem at his institution was creating a consensus about goals for the institution. “Sell internally, based on what externally needs to be said,” Lui replied, in order to create a single, common voice in the community among the complexities of the tribe.

With more than 566 federally recognized tribes and 35 accredited tribal universities, Lui said that tribal college leaders must “push hard for stories to be told.”

Using the different strategies presented at the presidents’ convening, TCU leaders left with an expanse of resources to implement change at their institutions and to show that they are on “the cutting edge of education,” Lui said.