HELENA, Mont. — The U.S. Department of Education has awarded a second round of funding for programs that help low-income students who aspire to attend college.

The Upward Bound awards are going to programs with applications that were initially rejected because of formatting errors such as not being double-spaced or using the wrong font. 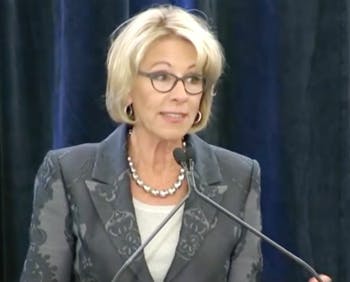 Members of Congress on Wednesday confirmed five-year grants to several universities, including Wittenberg in Ohio, the University of Maine at Presque Isle, Columbia University in New York, and the University of Montana, along with Illinois Central College and Kankakee Community College in Illinois.

Education Secretary Betsy DeVos initially said she would not reconsider the Upward Bound applications if they used the wrong font or were incorrectly spaced.

Program administrators and members of Congress decried the bureaucracy. A quarter of the U.S. Senate signed a letter asking that programs be allowed to submit corrected applications to “prevent this absurd result.”

Because the grants are awarded for five years, programs with rejected applications would not have been able to seek funding again until 2022, meaning dozens would have to shut down.

A spending bill that Congress passed in May encouraged the Education Department to reconsider, and included $50 million in funding for the grants.

Later that month, DeVos told a Senate committee that the 77 applications with formatting errors would be scored and considered in a second round of funding. It was not immediately clear on Wednesday how many schools received funding. Members of Congress were given information for their respective states.

More than 62,000 high school students around the country receive services from Upward Bound.

The program puts students on an academic track for college, includes summer programs that give them a taste of campus life, and arranges visits to colleges. Students can receive tutoring along with career advice and help in applying to colleges and obtaining scholarships and other financial aid.