Dr. Ken Atwater’s enthusiasm for community colleges is quite infectious. It’s apparent when you talk to administrators, faculty and some of the nearly 45,000 students at the five-campus Hillsborough Community College (HCC) where he serves as president.

Almost immediately, a picture emerges of a man who is on a lifelong mission to transform our nation’s educational system and believes that community colleges remain the cornerstones for higher education.

“I would have been a great community college student,” says Atwater, who grew up in Jackson, Tennessee, a small, rural town about 130 miles from Nashville. “When I came out of high school, I went straight to the university. I had no direction career-wise, other than that I wanted to be a doctor.” 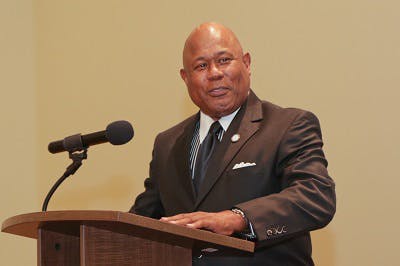 It was during his first two years at Murray State University — a public university in Kentucky —that Atwater found himself floundering as a pre-med student.

“I knew very quickly that making a 2.5 [GPA] was not going to get me into med school,” he says.

He remembers one class — a large lecture-style seminar — where a professor and graduate teaching assistant walked in, assigned students a number, handed them an assignment and then left the room.

“I would have excelled in a smaller classroom environment,” he says.

By the late 1960s, community colleges were springing up across the country and served as fertile ground for educators wanting to make a difference outside of the traditional secondary school environment.

One of his classmates was Dr. Walter Bumphus, who would go on to become a prominent community college leader, serving as chancellor of Baton Rouge Community College and the Louisiana Community and Technical College System. Today, he is the president and CEO of the American Association of Community Colleges.

The other classmate was Dr. Jerry Sue Thorton, who entered the community college as an English faculty member at Triton College. Thorton would go on to hold administrative posts at various institutions including serving as president of Lakewood Community College (now Century College) and later making history as the first female president of Cuyahoga Community College in Cleveland, a position that she held from 1992 until her retirement in 2013.

“As I saw their pathways develop and grow, I said ‘Wow, this is something I would enjoy doing,’” says Atwater. “So, I had a little test run because I watched them go through the process of preparing, leading and I sat and learned.”

Although Atwater’s parents did not have a college degree, they emphasized the importance to young Ken and his two brothers, all of whom would go on to college.

“By all means, the hub of our community was our church. Everything centered around church and family,” says Atwater. “There was not a doubt in my mind that we were going to college and all the kids in the church were going. Education was the key,” he says, adding that his father — a World War II veteran — believed that education would change the trajectory for his children.

When Atwater arrived at Murray, Bumphus and Thorton were upper-class students, but there were few minority students on campus.

“Out of 5,000 students, there were probably about 200 or 250 Black students,” says Atwater, adding that a tight-knit community was formed among the Black students. “No matter where we were, we all clung together.”

Before Atwater, Bumphus and Thorton would step foot on the Murray State University campus in Kentucky, Mary Ford Holland — a nontraditional student — enrolled at Murray in 1955 as its first African-American student. She was 48 years old.

“It was not a hostile school,” says Thorton, who recalls that Black students were paired with other Blacks as roommates and were intentional in enrolling in classes that had at least another African-American.

“We were very active in the Black Student Affairs,” says Thorton, adding that comedian Dick Gregory and civil rights activist Julian Bond spoke on campus during their time there.

“He knew my wife before he knew me because they had a class together,” says Bumphus. “Through that friendship, a lifelong friendship developed.”

It is phenomenal to note that all three of these friends who were close during their undergraduate years would go on to become community college presidents, said Bumphus.

After Atwater graduated from Murray in 1977, he enrolled in a master’s program in guidance and counseling and went on to pursue a doctorate in higher education with a focus on community colleges from Southern Illinois University.

An expert on student development

As an administrator, Atwater has become particularly known for his work in student affairs, says those who have followed his development across the years.

“He became an expert in student development programs and executed a number of cutting edge programs where he worked,” says Bumphus.

“He has always been very student-oriented,” says Thorton, adding that diversity has been a signature part of his core focus. 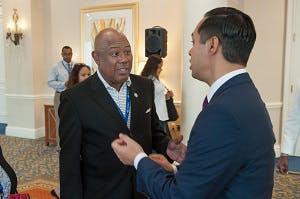 Atwater took a job as a counselor at Jackson State Community College located in his hometown. He eventually become dean of student affairs.

After five years as vice president for student services at Kellogg Community College in Michigan, he assumed the presidency when he accepted a job offer at South Mountain College in Arizona, where he remained for nine years. He was hired at HCC almost a decade ago.

“I always moved when I thought there was an opportunity for me to learn how to be a better community college president. I worked very hard to get to Hillsborough Community College,” says Atwater, who says that he embraces the philosophy and the service component of the community college.

“I like the flexibility to get things done quickly. There’s not a lot of red tape. You can respond very quickly,” he says.

For example, when he decided to launch a firefighter and welding program, he was able to move forward with creating the programs in several months and not years.

“That flexibility and responsiveness to the community is what attracted me to community colleges along with the types of students we serve,” says Atwater, who is chair of the Tampa-Hillsborough Economic Development Corporation, the National Association for Community College Entrepreneurship and the Museum of Science & Industry’s National Board and the CEO Council.

During his tenure, Atwater has helped to grow HCC, making it the seventh largest community college in Florida’s state college system. The institution currently offers more than 160 academic programs, including 34 associate in arts degree transfer tracks and over 130 workforce programs.

“We’re open door for everybody and I love being in a diverse environment,” he says. “Diversity is an asset.”

Although he did not create it, Atwater has invested heavily in HCC’s annual “Black Brown College Bound” conference, which has become a national event attracting young men of color from across the nation. The conference also brings in high-profile speakers like Dr. Michael Eric Dyson, John Legend, General Colin Powell and others to motivate the young men.

Workshops and panels are held to encourage young men of color to enroll and stay in college.

“I am very fortunate that two African-American women had the foresight to start developing this to address this national crisis that we all face and I’ve just tried to take it and enhance,” says Atwater.

HCC officials have created the HOPE Scholars program, a program designed to improve retention, graduation and the four-year college transfer rate of African-American and Hispanic males. Scholars in the program are provided tutorial services and attend workshops, seminars, and four-year college or university tours. 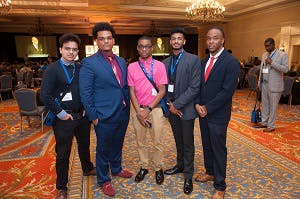 By all measures, HOPE Scholars are succeeding, graduating at 80 to 85 percent.

“Our biggest challenge is that we just don’t have enough resources to mainstream this,” says Atwater, adding that the school currently works with 60 to 80 men but would like to expand their offerings to about 300 male students.

“Through his leadership and support for diversity, equity, and inclusion and, notably, his support for HCC’s Black, Brown, and College Bound Conference, Dr. Atwater has demonstrated a deep understanding that people and institutions are what they repeatedly do,” says Dr. Christine Johnson McPhail, a seasoned community college administrator and diversity expert. “Dr. Atwater’s courageous support and advocacy for the national conference repeatedly brings together national experts, educational leaders, practitioners and students to discuss the programs and strategies that have proven effective in increasing the academic achievement of underrepresented males in higher education, as well as the unique issues facing this population.”

He says that he is encouraged by the young people who are considering roles in the community college, but says that patience is key.

“There is only one disappointment that I have in the younger generation, and that is that they want it immediately,” Atwater says.

“I did over 15 years of preparatory work to be a community college president.”

And his hard work shows, says Bumphus who has not only known Atwater for four decades but has worked with him closely after he was elected to the AACC board.

“He is just amazing in his ability to relate to anybody and any person. And he was like that in college,” says Bumphus. “He has always been willing to get to know people and to help in any way he can.”

This article appears in the April 18, 2019 edition of Diverse.