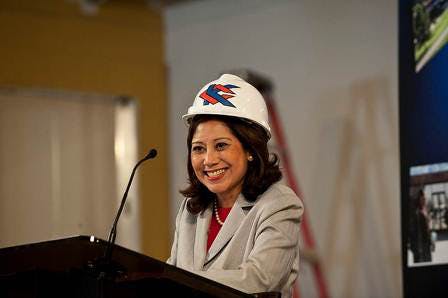 While most of us would not debate the value of a four-year degree, this American dream remains beyond the reach of many as the cost of a college education continues to rise. However, even in 2012, there are many family-sustainable occupations to be had without that sometimes-elusive document.

The U.S. Department of Labor, in conjunction with the Department of Education, has recently awarded 54 grants to 297 schools across the U.S., District of Columbia and Puerto Rico to increase workplace development programs in community colleges around the country, thanks to a provision in the Health Care and Education Reconciliation Act signed by President Obama in 2010. The initiative — the Trade Adjustment Assistance Community College Career Training (TAACCCT) program — awards grants for training programs to enable schools to meet the needs of local industries in an ongoing effort to develop a stronger national workforce.

According to U.S. Labor Secretary Hilda Solis, nearly half of all job openings in the next decade will be “middle-skill” jobs, requiring less than a four-year degree but requiring more than a high school diploma. She sees these grant programs as “tickets to employment.”

In Nebraska, which boasts a 4-percent unemployment rate, the primary problem is the lack of people with industry-required skills. The manufacturing industry is working closely with schools so that training is geared to move the student directly from school to work. Soft skills, such as getting to work on time, are also addressed to make these students “career-ready.”

According to Tony Raimondo, chair of the Nebraska Advanced Manufacturing Coalition, “Over 80 percent of manufacturers report a moderate to serious shortage of skilled talent in the hiring pool.”

Nebraska’s Central Community College is a leader in a consortium in workforce development. There, the DOL grant will help address a state-wide need for manufacturers by allowing the school to offer a manufacturing generalist degree consisting of 12 hours of core requirements. One may choose to continue to get an industry certificate, then go on to a diploma (32 credit hours), then on to a full two-year associate degree.

Alaska has been ahead of the rest of the country in construction and development, but much of the work has been outsourced because of a lack of skilled workers. Though Alaska schools have industry support for architectural engineering, drafting, interior design and surveyors — construction trades — many of the companies whose employees were eligible for the grants have left the state. Historically, TAA funds were set up to compensate workers who lost their jobs due to foreign competition, and in order to make use of the funding schools have received, Alaska’s community colleges are working to expand the criteria for eligible recipients, allowing people in different fields to receive training in these disciplines.

The Pennsylvania College of Technology, another consortium leader in workforce development, has received an almost $15 million grant, which will train workers in four primary components of oil and natural gas production: upstream, midstream, downstream and instrumentation/electronics.

According to Larry Michael, the assistant vice president of Work Force Development and Special Projects at the Pennsylvania College of Technology, “Through the use of this funding, the federal government is investing in job training for those individuals that have lost their job due to foreign competition. This TAACCCT investment will result in these displaced workers receiving new skills that will allow them to get family-sustaining jobs, which will in turn reduce the nation’s unemployment rate.”

In North Carolina, Forsyth Technical Community College has received a TAACCCT grant of just under $15 million. The North Carolina Consortium to which Forsyth Technical Community College belongs consists of 12 colleges that have begun looking across the country for best practices to bring back to North Carolina. In January 2012, the schools in the consortium started working with 45 companies and employers, teaming up with high-performing colleges to work on grants. Forsyth, which focuses on biotechnology, will pilot a modular learning lab where assessments will be conducted and duplicated nationally. Students will develop core skills in bioscience, working with industry partners, producing industry-recognized skill sets and obtaining “industry-recognized” credentials.

Russ Read, executive director of the National Center for Biotechnology Workforce, says, “These are recessionary times. Biosciences offer a bright and shining star. The jobs will be here. Bioscience affects everyday living: Is your food safe? Are your medicines safe? Is the future going to be more in biofuels? We need to care because industry is [thriving] and we need skilled workers.”

In today’s swiftly changing economy, one needs to do whatever it takes to be more marketable. In addition to developing the skills of the current workforce, the concept of “reverse articulation” will allow someone with a four-year degree to attend an institution to obtain industry-recognized credentials or even an associate degree. While the four-year degree has equipped the individual with the knowledge to perform, an ever-changing industry requires the hard skills to keep up.

Another way in which this program works is in partnering closely with four-year institutions to “fast-track” individuals. Winston-Salem State University will have a one-year inter-disciplinary study where either a Bachelor of Science (B.S.) or a Bachelor of Interdisciplinary Studies (B.I.S.) can be obtained in one year plus one summer.

Unorthodox? Yes. But, in these times, perhaps necessary.