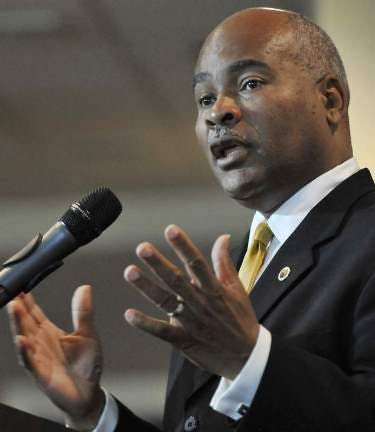 Joseph Silver, recently let go as the president at Alabama State University, is just one example of HBCU leadership in turmoil.

So many challenges, so little time, and even fewer resources.

For many of the nation’s 105 historically Black colleges and universities, these factors have led to an unprecedented number of presidential vacancies resulting in instability and even turmoil on some of the campuses. By the end of 2012, at least 20 permanent HBCU presidencies were either vacant or recently filled.

Adding to the overall uncertainty surrounding the resignations and dismissals, an interesting phenomenon began to occur. Some presidents who had not completed their first contract terms abruptly resigned or were ousted by their governing boards. Most recently, at two public HBCUs — Alabama State in Montgomery and Morgan State in Baltimore, Md. — two popular presidents were cast aside.

At Morgan State, the board of regents voted in December not to extend the contract of David Wilson, who had served as president for just over two years. His contract was set to expire in August 2013. At Alabama State, Joseph Silver was placed on paid leave in November after being on the job for 10 weeks. At North Carolina’s Shaw University, Dr. Irma McLaurin resigned in August 2011 after 11 months in the position. She was the third president in three years.

Silver makes a cautious assessment of the situation. “Let’s not try to read too much into the vacancies at this point,” Silver says, adding that some were due to retirements and normal attrition. “I do believe, however, that many HBCUs are at a crossroad. One only has to look at enrollment, graduation rates, issues related to accreditation, alumni and board giving and the financial challenges many of the HBCUs face.”

At both Morgan State and Alabama State, no reasons were cited publicly for the boards’ actions, but both presidents pushed back and both were supported by ardent student demonstrators. Silver issued a response saying he had questioned apparent discrepancies in financial matters and the awarding of contracts. Wilson released a letter “to the Morgan State family,” listing his considerable accomplishments, including an increase of more than 20 percent in federal grants and contracts and improving the student retention rate to higher than 70 percent for two consecutive years.

“There are many reasons for the disproportionately high turnover, most of which relate to funding and the … disproportionate numbers of HBCUs that are educating these growing student populations: students of color, first generation students, students whose families have fewer financial means, many of whom come to college from low-performing high schools,” explains Baskerville, whose organization represents top administrators of HBCUs.

She says policymakers and legislators must constantly be informed of the unique challenges facing HBCUs. One such policymaker has joined the ranks of HBCU presidents. John S. Wilson, former executive director of President Obama’s White House Initiative on Historically Black Colleges in November 2012 was appointed president of Morehouse College in Atlanta.

Like Baskerville and Silver, Mason views funding as a key factor of leadership instability. “Resources are shrinking and expectations continue to rise,” Mason says. “The issues are compounded at HBCUs due to our historic and current lack of access to wealth.”

Malveaux says her experiences at Bennett illustrate how critical the fundraising component is to an institution’s survival. “Until HBCUs figure out ways to shore up income streams, the pressure to fundraise is always going to be great,” says Malveaux, who served for five years at the helm of the private, United Methodist-affiliated college for women in Greensboro, N.C.

When the recession hit, much of the college’s traditional funding sources dried up. She also was faced with other ongoing internal problems. “It was like a juggling act and you hope you don’t drop a ball,” she recalls. Finally, Malveaux says, “When my blood pressure reached 210 over 110, I said, ‘No more, enough is enough.’” However, after leaving last May, she says, “I’m doing fine now.”

Malveaux’s five-year stint at Bennett is a now considered a relatively long tenure for an HBCU president, and her resignation was more cordial than some of the other recent departures.

South Carolina State’s Dr. George Cooper resigned in March 2012, giving only 30 days notice, after serving for four years amid what can only be described as chaos. The board had fired Cooper in 2010, then reversed itself a few weeks later after two board members who opposed him were replaced. After Cooper left last March, an audit determined that the school had misclassified funds for years in order to make it appear that it held more assets than it did. SCSU has had three different leaders since 2005.

At Mississippi Valley, the State College Board voted in October 2012 not to renew President Donna Oliver’s contract, which began in 2009. She was supposed to remain at the university until Dec. 31, but in late November the board brought in Acting President Dr. Alfred Rankins, giving no reasons for Oliver’s departure or the early replacement; however, the school had suffered from declining enrollment.

Another issue raised by the four higher education executives is the role of the governing boards. “There is … a need for competent and forward-looking boards who are appointed based on their ability to position the university and hold it in trust,” Silver says. “The administrators and board members should always have the best interest of the university at heart. Each should keep in mind that they do not ‘own’ the institution; rather they are stewards of the institution who are responsible for the growth and sustainability of the college or university.”

Silver suggests that while the board should hold the president accountable at all times, it “should not be involved in the day to day operations. … Shared governance should be the order of the day with faculty, staff and students playing an appropriate role.”

Mason believes HBCUs “need a clear value proposition as an industry niche. I think for public HBCUs our Five Fifths Agenda for America may offer that.” Mason was referring to a national initiative that he and other educators are promoting to recruit and retain a larger contingent of Black males, thereby helping society by saving Black men from unhealthy alternatives and helping the institutions by improving enrollment, retention and purpose.

NAFEO has addressed leadership issues by offering training and mentoring programs. It hosts a “best practices institute” and the HBCU Freshmen Presidents’ Boot Camp and Training Institute during its annual Presidential Peer Seminar. According to Baskerville, the training covers topics including budgeting, governance and fundraising.

NAFEO also has provided teams of experts from across the country to assist presidents and chancellors with their internal and external challenges. But Baskerville says the most important thing the organization is doing — along with presidents and institutional fundraisers — is “agitating 24/7” at the state and federal level for additional investment in HBCUs.