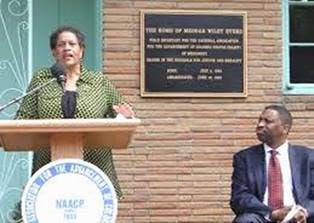 Instead, she’s determined to celebrate the legacy of her first husband, Medgar Evers, a civil rights figure often overshadowed by peers such as the Rev. Martin Luther King Jr. and Malcolm X.

Events including a Black-tie gala are being held this week to remember Evers, the first Mississippi field secretary of the National Association for the Advancement of Colored People. He was 37 when he was assassinated on June 12, 1963.

“We are cursed as human beings with this element that’s called hatred, prejudice and racism,” said Evers-Williams, now 80. “But it is my belief that, as it was Medgar’s, that there is something good and decent in each and every one of us, and we have to call on that, and we have to find a way to work together.”

Evers-Willliams, who moved back to Mississippi in 2012, is treated with reverence by strangers who recognize her these days. She recently went to downtown Jackson’s King Edward Hotel to meet reporters from The Associated Press for an interview — a hotel, she notes, that was off limits to Black people decades ago. As she waited for her coffee, a White man approached to shake her hand and ask if she’d pose for a photo.

Evers-Williams smiled cautiously, then beamed, as Walker said he believes she and Medgar Evers had made Mississippi a better, more open society.

Evers-Williams gave the invocation at President Barack Obama’s inauguration in January, and met with the president June 5 at the White House. A ceremony of remembrance was held June 6 at Evers’ gravesite in Arlington National Cemetery, attended by former President Bill Clinton and Attorney General Eric Holder.

Myrlie Beasley and Medgar Evers met as students in 1950 at Alcorn College, a historically Black school in rural southwest Mississippi. He was from Decatur, Miss., and served in the Army during World War II before becoming a star football player for the school. Nearly eight years his junior, she was a talented pianist raised by a protective grandmother in Vicksburg. The couple married in 1951.

In 1954, Evers applied to the all-White University of Mississippi Law School. After he was rejected, he sought the NAACP’s help to file a lawsuit. Instead, the organization hired him to coordinate its work in stubbornly segregationist Mississippi.

Evers spent years investigating violence against Black people, including the 1955 killing of 14-year-old Emmett Till. He helped James Meredith gain admission as the first Black student at the University of Mississippi in 1962. Evers pushed for Black voter registration, drew young people into the civil rights movement and, in the final months of his life, led a boycott of White-owned businesses in downtown Jackson.

Two weeks before his death, Evers helped coordinate a sit-in at an all-White lunch counter. That night, someone tossed a firebomb at his house. It was extinguished, but the warning was clear.

Evers-Williams recalled that the night before her husband was slain, she sat with him on their couch and talked about the danger. He made her promise that if anything happened to him, she would take care of their three young children. She also vowed that if he were killed, she would seek justice and keep his memory alive.

The night he was killed, Medgar Evers stayed out late, attending a community meeting. Shortly after midnight on June 12, 1963, he arrived home. His wife and children were still awake after watching a televised speech on civil rights by President John F. Kennedy.

“And as soon as the children said, ‘There’s daddy,’ the shot rang out — one of the loudest and most powerful I had, and still have, ever heard. And I knew exactly what had happened,” Evers-Williams recalled.

Neighbors drove Evers to the University of Mississippi Medical Center a few miles away. Within an hour, he was dead from the shot to his back.

Evers-Williams and her children moved to California just over a year later.

“We could no longer live in our home,” she said. “The memories were just too vivid, and I could never get all of the blood up off of the concrete driveway.”

A White segregationist, Byron De La Beckwith, was tried twice for Medgar Evers’ slaying in the 1960s, but all-White juries failed to convict him. The case was re-opened in the 1990s based on new evidence, and he was convicted of murder in 1994. He was 80 when he died in prison in 2001.

Myrlie Evers-Williams remarried in 1976 to longshoreman Walter Williams, and the couple moved to Oregon in 1989. Williams died of cancer in 1995, about the time she became national chairwoman of the NAACP, a post she held until 1998. She is widely credited with putting the organization back on solid financial footing.

She had never planned to move back to Mississippi, but was drawn by an invitation to teach at her alma mater, now known as Alcorn State University.

Evers-Williams said she sees progress, such as Mississippi’s large number of Black elected officials, including a congressman and mayors of Jackson and several other cities. It’s common to see Black and White people working together and socializing, though many neighborhoods are still largely one race or another.

Still, some things disturb her in Mississippi and elsewhere. Long lines to vote and voter-identification laws could limit access to the ballot, she said. When Obama was re-elected, clashes between students at the University of Mississippi were largely divided on racial lines.

What would Medgar Evers think about American society now?

“I believe he would look at the landscape of this country and realize what so many of us have said: We have made progress but there’s still so much to be done, and if we don’t guard the progress we’ve made, that too will slip away,” Evers-Williams said.

She spoke at the University of Mississippi graduation May 11, and the university gave her a humanitarian award — the third it has ever given. After the ceremony, she was attending a campus reception when James Meredith and his wife arrived.

“I ran to the door, and I stood there and held my arms out,” Evers-Williams recalled with a smile. “I said to him, ‘You can’t come in here unless you come through me.’”

It was an echo of long-dead segregationist governors.

“We had the biggest laugh,” Evers-Williams said. “We laughed until we cried. Here we are, 50-plus years later, and we can do that now.”