If you see the Internet as raceless, colorblind and digital, think again my friend.

Witness the instances of the nearly instantaneous anti-Asian racist tweets soon after the Asiana Airlines crash this weekend.

On social media, you can see the knee-jerky reaction. It’s racism in real time. Time for bad racist comedy.

From the looks of it, the culprits were fairly diverse.

That was an example posted by the folks at www.changelabinfo.com

They found a few others too. 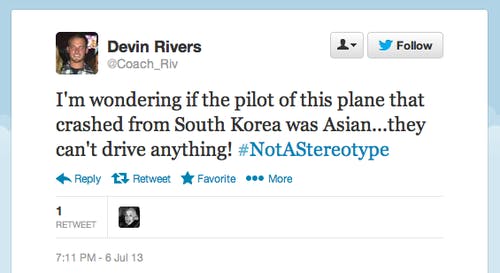 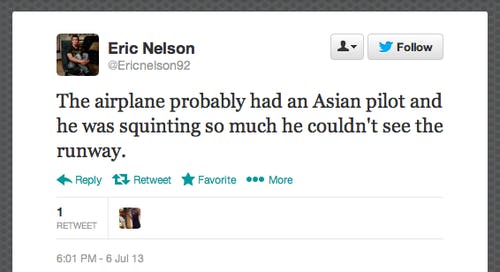 What’s this have to do with diversity and higher-ed?

Well, if you haven’t noticed, Twitter is one of the main places most of your higher-ed, and pre-higher-ed types like to do their communicating—and display their ignorance.

What I found encouraging was that it wasn’t just Asian Americans calling out the racists. It was people like Elon James White, the host of the radio show and podcast “This Week in Blackness.”

Well, the subject of bad Asian drivers is a hackneyed joke that deserves a snore.

But when James got back some lip, he responded.

Oh I’m only supposed to get made at Black jokes? Sorry

He meant “mad” but it’s Twitter, were typos are forgiven.

Racism, however, is not.

When someone suggested any joke on the tragedy made by black comedian Kevin Hart would be funny, White responded:

No it wouldnt. RT @SAMgoesHAM_4TB: The funny part about this is if @KevinHart4real said that Asian joke it would be hilarious. @me @mrdaveyd

Dismiss the communications on Twitterverse at your own peril. It’s a real reflection of the the way racism exists today.

In fact, the digital sense of things can at times provide just enough anonymity to embolden racists who would otherwise suppress their racism.

In that way, the internet is the way some people can slip on the all new, digital “white hood.”

Most Asian Americans wouldn’t have been tweeted racist jokes by their friends.  But they’d see them by others who re-tweet others about a big event like a plane crash.  That’s how I found out about the racist tweets. That made it important for non-Asian Americans to be “first responders” who recognized what was happening.

Fighting racism requires a diverse effort when the perps these days come in all shapes, colors, and tweets.

Emil Guillermo is an award-winning journalist who writes for the Asian American Legal Defense and Education Fund.Contact him at twitter@emilamok  or  www.aaldef.org/blog