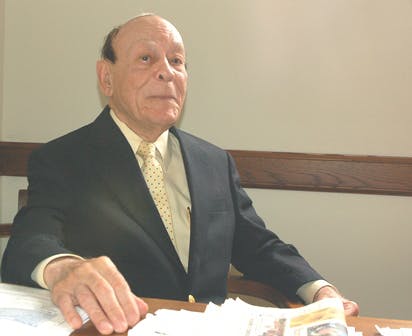 Leslie M. “Doc” Collins taught full-time at Fisk University from 1945 until his official retirement in 1979. He would, however, teach several courses a year until 2008. (Photo by Daryl Stuart)

Leslie M. “Doc” Collins, who became a living legend at Fisk University during more than half a century teaching English and African-American literature at the historic institution, died Sunday evening at his home in Nashville. Collins was 99.

Collins, a teaching peer of artist Aaron Douglas, American poet laureate Robert Hayden and poet and librarian Arna Bontemps, taught full-time at Fisk from 1945 until his official retirement in 1979. He continued to teach several courses a year until 2008.

During the course of his career as an academician, Collins accumulated a roster of unknown, ambitious students who, today, are among the nation’s who’s who in the literary world, including noted poet Nikki Giovanni.

Other Fisk students, who did not take classes from him, later sought his knowledge, advice and counsel including two-time Pulitzer Prize-winning historian David Levering Lewis who said in a brief phone interview Monday that Collins “was invaluable to me” in research and writing of his 1980 book, “When Harlem Was in Vogue.”

Collins came of age during the Harlem Renaissance and got to know many of its principal figures, including Charles S. Johnson, who would later leave New York City for Nashville where he would become president of Fisk.

Collins met Arna Bontemps and Aaron Douglas during that era and worked for two years as personal secretary to the late legend Paul Roberson.

“This is the last of the immortals, the end of an era,” said Tennessee State University history professor Dr. Crystal deGregory, a Collins student. She said Collins was the last of a generation of teachers who taught on campus, lived on campus and associated on a daily basis with students, eating three meals a day in the college cafeteria with his students.

“He was uncompromising in his demand that students excel in class and life,” said deGregory, who came to Fisk in 1999 from The Bahamas and earned her bachelor’s degree there in 2003.

“He had an uncompromising standard that was exceptionally high,” deGregory said of Collins.

Much of the men’s styling of the Harlem Renaissance stuck with Collins over the years. Regardless of how young men’s fashions changed over the decade, his trademark was to always be immaculately dressed in suit and tie, have a top hat and walking stick. He rarely was seen in public dressed casually and, for sure, not for pictures.

“He was certainly a very present personality,” said Lewis, recalling his college days at Fisk.

In announcing Collins’ death Monday, Fisk said he joined its faculty in 1945 as a professor of English, teaching courses that included freshman composition, advanced composition, Milton and Black literature.

Collins taught a course called “The Harlem Renaissance Generation,” the institution said, and developed bookmarks for undergraduates to teach them about Fisk writers and Black authors. He also authored a book about Fisk presidents from 1875 to 1975.

A memorial service in his honor is set to be held this week on the Fisk campus.