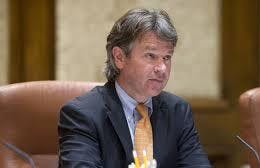 AUSTIN, Texas ― After months of investigating University of Texas System Regent Wallace Hall’s relentless efforts to oust the president of the Austin flagship campus, a group of state lawmakers is set to vote on whether to recommend removing Hall from office.

The House Select Committee on Transparency in State Agency Operations meets today to decide whether Hall’s conduct pursuing evidence against University of Texas President Bill Powers warrants a recommendation that he be impeached.

A vote in favor of impeachment would set the Legislature on course toward the first direct removal from office of a governor-appointed official in state history. The matter would then go the full House, which could send Hall to the Senate for a trial and a vote on whether he stays or goes.

There have been very few impeachment trials in state history and only two have been successful: Gov. James “Pa” Ferguson in 1917 and a district judge in 1975.

“This is a historical time,” committee co-chairman Rep. Dan Flynn, R-Van, said of the pending vote. “Years to come, people are going to be looking at this.”

At issue is whether Hall, a Dallas businessman appointed by Gov. Rick Perry in 2011, abused the power of his office through massive open records requests that swamped university and system officials, as well as whether he violated state and federal student privacy laws and harmed the university’s reputation.

An investigation report for the committee says Hall may have broken the law. The Travis County District Attorney’s anti-corruption unit has opened a separate criminal investigation.

The panel also could vote against impeachment and recommend some other punishment, such as a public reprimand.

Hall, through his attorneys, has denied breaking any laws and argued that all of his records demands and inquiries into Powers’ tenure as president fell within his responsibility as a regent charged with overseeing the system’s 15 education and medical institutions.

Perry, who is winding down 14 years in the governor’s office and is not seeking re-election, has said he supports Hall.

Hall’s legal team sent Flynn and committee co-chair Rep. Carol Alvarado, D-Houston, a blistering letter last week accusing the panel of withholding evidence from county prosecutors and the public that could exonerate Hall, notably a secret audiotape made of a private regents discussion with system Chancellor Francisco Cigarroa in August 2013. Regent Alex Cranberg has acknowledged making the recording of that discussion, but the tape has not been made public.

Hall did not testify before the committee. In the letter, Hall attorney Allan Van Fleet complained the investigation panel “has manipulated the process to prevent public exposure to the truth about every issue under investigation.”

The panel invited Hall to testify but refused to issue a subpoena that might have offered him legal protection, and leaked a draft of the investigation report to the media before Hall or his attorneys had a chance to see it, the letter said.

Hall is one of nine board members and isn’t the only one who has clashed with Powers over myriad issues, including tuition and graduation rates and the role of teaching and research in education. But it has been Hall’s aggressive and relentless pursuit of records and questions over Powers’ leadership that drew scrutiny from lawmakers.

Powers testified before the committee in December, saying his battle with Hall had done “significant harm to our reputation in the academic world nationally and internationally.”

Cigarroa was critical of Powers at the regents’ December meeting, saying the president had to improve trust and communication when dealing with regents and system staff.

Powers managed to hang onto his job with a slim majority of board support as the Legislature, prominent alumni, faculty and students rallied behind him. Several groups have called on Hall to resign.

The Texas Coalition for Excellence in Higher Education, which was formed in 2011 to push back at some of Perry’s reform efforts and includes some of the UT’s top financial donors, called for Hall to resign.