Norman Francis Stepping Down in 2015 as Xavier University President

Dr. Norman C. Francis has been affiliated with the nation’s on Black Catholic college for nearly 66 years.

Dr. Norman C. Francis, the nation’s longest serving university president, announced today that he plans to retire next year as president of Xavier University in New Orleans, nearly 47 years after he first assumed the post.

“I believe that the time has come to take the brightly burning torch turned over to me by the Sisters of the Blessed Sacrament and pass it on to new leadership,” Francis told students, staff and faculty who gathered at a mandatory convocation held on campus. “I do so with the passionate confidence and absolute certainty that Xavier is better prepared than ever to continue its educational and spiritual mission, and to build on its tradition of excellence.”

The school was temporarily closed and classes were canceled for the historic announcement.

“You know when it’s time to go,” Francis told Diverse in an interview Thursday. “They weren’t going to drag me out of the ring. I was going to walk out.”

Francis, 84, has been affiliated with Xavier for nearly 66 years, having arrived to the nation’s only Black Catholic college from Lafayette, Louisiana, as a 17-year-old freshman in 1948. He quickly made a name for himself on campus, earning a degree in 1952 and going on to become the first African-American to attend Loyola Law School in New Orleans.

In recent years, Francis had been tight-lipped about his plans to retire, but sources say that his wife’s illness and his own age factored into his decision to step down. But in an interview with Diverse last month, he was deeply reflective about his experience as president and talked about his legacy and the desire to write his memoir.

Michael Rue, chairman of Xavier’s Board of Trustees, praised Francis with helping to triple student enrollment and growing the university’s endowment from $20 million to more than $160 million during his tenure.

“Since Dr. Francis became president, a campus of five permanent buildings that could fit on one city block has grown to 16 permanent buildings and manicured green spaces extending out over 63.4 acres,” said Rue. “Today, Xavier is first in the nation in the number of African-Americans earning bachelor’s degrees in biology, chemistry, physics and physical sciences, and we’ve held this position at the top for the last decade.”

Rue, a real estate developer, said that he was impressed with Francis’ commitment to Xavier from the moment the two met a decade ago.  “I am very moved by this man,” Rue said in an interview. “This man has something for real. There is nothing fake about him. He is who he is.”

Often referred to as the “dean” by other HBCU presidents, Francis has commanded the respect of his colleagues and has mentored a legion of younger college presidents across the years. He has also been a prominent fixture in the city, having forged close relationships with New Orleans mayor Mitch Landrieu and his father Moon, who was Francis’ classmate at Loyola in the 1950s and later went on to serve as mayor of New Orleans from 1970 to 1978.

“I have always admired Dr. Francis and he was one of my role models,” said Dr. Walter M. Kimbrough, president of Dillard University, another HBCU located in New Orleans. “This was especially true since he worked in student affairs and became a president at 37 as I did. But being in New Orleans with him for two years has taken my admiration to a whole new level because I have watched him in action. He is awesome.”

Dr. Marybeth Gasman, a professor of higher education at the Graduate School of Education at the University of Pennsylvania and an expert on HBCUs, said that Francis was effective despite his longevity in office.

“President Francis has been an exemplary president in terms or fundraising, bringing deep respect and visibility to Xavier, and pure excellence in producing students interested in science and medicine,” said Gasman, who also directs Penn’s Center for Minority Serving Institutions.

At a time when there is high turnover among HBCU presidents, Francis remains an anomaly. 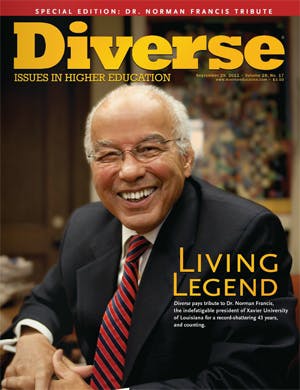 U.S. Secretary of Education Arne Duncan was among those who praised Francis and said that he was a “model of leadership and service.”

A champion of civil rights, Francis was an effective attorney who used his law degree to fight the vestiges of Jim Crow segregation. He represented civil rights activists, and later, when he became president of Xavier, he provided temporary housing on campus for Freedom Riders who passed through the city.

In 1957, Francis was appointed Xavier’s dean of men and was appointed the first African-American and first layman president of Xavier on April 4, 1968, the day that Dr. Martin Luther King Jr., was struck dead by an assassin’s bullet on the balcony of a Memphis motel.

In 2006, President George W. Bush awarded Francis with the Presidential Medal of Freedom, the nation’s highest civilian honor. A year earlier, Xavier was lauded for being the first university in New Orleans to be up and running after Hurricane Katrina devastated the Gulf Coast.

“We all wish Dr. Francis could remain as Xavier’s president for at least 50 more years,” said Rue. “We take solace in the realization that Dr. Francis will be forever with us through the institution he helped shape.”

It’s unclear who the Board of Trustees will ultimately select as Francis’ replacement next year, but several sources say that Marc Morial — the former New Orleans Mayor and president and chief executive officer of the National Urban League — might be a viable candidate for the job. Morial is currently a member of the school’s Board of Trustees.

Throughout the day, a flurry of well-known celebrities like Bill Cosby phoned in to offer their congratulations to Francis.

In an interview with Diverse, political strategist Donna Brazile, who grew up in New Orleans and has known Francis for years, said that he is an iconic figure.

“Dr. Francis is a dynamic educator, a visionary leader and a humanitarian who has guided Xavier University into the 21st century. Thankfully, he is leaving a stronger institution with a plan to continue its success into the future. On a personal note, Dr. Francis has been a tremendous force of good for the entire Louisiana population. He has earned this retirement. He deserves an opportunity to rest, but he will never be replaced.”