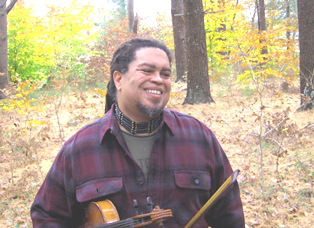 But Mwalim traces his ancestry not only to Africa, via Barbados, but also to North America — the first Native American tribe that encountered the Pilgrims in the 1600s. He says he embraces both parts of his racial-ethnic identity.

Many African-Americans claim some Native ancestry, often based on family oral history passed through the generations but frequently undocumented. Mwalim’s Native heritage is certain. He belongs to the Mashpee Wampanoag Tribe in Massachusetts.

His lineage represents a major source of Native ancestry in African-Americans — the Eastern tribes, according to Dr. J. Cedric Woods, director of the Institute for New England Native American Studies at the University of Massachusetts Boston.

“Most of the tribes have some degree or another of African intermixture,” says Woods, a member of the Lumbee Tribe of North Carolina. “It may be a single family line. It may be multiple lines. It may be most of the lines in the tribe. It can run the entire spectrum.”

The new organization does not require participants to prove their Native lineage. Other Native Americans accuse people who say they are Native without documentation, like Massachusetts Senator Elizabeth Warren, of “ethnic identity fraud.”

Tribes have various eligibility requirements, including the degree of Indian blood, to become a member or citizen of that Native nation.

The rights and benefits that come with tribal citizenship also vary, Native Americans of different racial and ethnic backgrounds struggle to ­and acceptance among tribes, Woods says, but generally include the right to vote in the tribe’s elections, hold office in its government and receive social benefits, such as health care and education. Some tribes that own casinos distribute equal payments to members; others do not.

Some African-Americans have been recognized as citizens of Native nations without necessarily having any Native blood. They are descendants of the slaves of five tribes originally from the Southeast — the Cherokee, Seminole, Creek, Choctaw and Chickasaw.

Those tribes were called “civilized” after settling down to farm, with more prosperous members copying the Southern plantation model. They were nonetheless forced out of the South in the 1830s on the Trail of Tears, taking their slaves with them on the deadly, arduous journey to Indian Territory, now part of Oklahoma.

During the Civil War, those tribes supported the Confederacy. Afterwards, the federal government drafted similar treaties in 1866 requiring the tribes to free slaves and make them and their descendants tribal citizens.

Those Black people became known as the freedmen of each tribe. Despite the treaties, their citizenship rights have been repeatedly disputed in the courts.

Few people know about that unusual piece of Black-Native history, even in Oklahoma, says Hannibal Johnson, a Tulsa lawyer and author of the 2012 book, Apartheid in Indian Country?: Seeing Red over Black Disenfranchisement.

“They are still largely unaware of the present controversy over the status of the freedmen in the context of the five tribes,” Johnson says. “I would describe that status in all five tribes as tenuous at best.”

A small percentage of Cherokee Freedmen are tribal members, and a decision on the citizenship issue is pending from a federal judge in Washington, D.C. Seminole Freedmen have limited citizenship. Creek, Choctaw, and Chickasaw Freedmen do not have tribal rights.

Johnson says people mistake the controversy as being about ethnicity. He and Woods note that being a member of a Native tribe, as far as the federal Bureau of Indian Affairs is concerned, is instead a matter of political affiliation.

The Cherokee Nation has tried to limit membership to people who have an ancestor with Cherokee blood on a census that a federal commission compiled a century ago. The commission followed the one-drop rule, so a blood quantum is generally not listed for freedmen.

That process “masks the fact that they have Indian blood coursing through their veins,” Johnson says, referring to some freedmen of the five tribes.

Tribes that have remained in the Southeast, Woods says, have members of African descent because Black people have lived nearby for so long — starting with the first slaves in the 1600s.

“Most of the African people were in the South, but there were also large concentrations in southern New England. I’d say those tribes that are in those areas have the highest probability of having African ancestry,” Woods says.

His tribe, the Lumbee of North Carolina, is an example. Woods says he had an ancestor, a former slave, who married a woman of the state’s Waccamaw Siouxan Tribe in the early 1800s.

His family later intermarried with the Lumbee and adopted that tribal identity.

Other Southeastern tribes with a similar racial mix, Woods says, include the Eastern Band of the Cherokee and Coharie in North Carolina and the tribes of Virginia.

In New England and other parts of the Northeast, Woods says, ports, maritime trade and whaling brought Natives and Africans together. Free or escaped slaves from the South who went north, he says, had “the shared experience of working on ships with Native men and finding their way back to those Native communities and intermarrying.”

Northeastern tribes that Woods identified as having members with African ancestry include the Wampanoag communities of Massachusetts, Pequot of Connecticut, Narragansett of Rhode Island and Shinnecock of Long Island, New York.

Some Black families have oral histories about ancestors escaping slavery and finding refuge among Native Americans.

“It did happen occasionally, but it was fairly rare,” Woods says. “Probably the best-known situation where that occurred was with the Seminole of Florida.”

Runaway slaves from the American South fled to Florida when it was Spanish territory and blended into the Seminole. The African-descended members joined the blood Seminole in an ultimately unsuccessful defense against American soldiers.

Like the Seminole, many tribes historically adopted as members individuals from other tribes and people who were not Native, be they of European or African descent. White settlers later introduced the concepts of race and blood quantum.

“If you were of those people and you lived among that tribe long enough, you were eventually part of that tribe. And that’s how it was,” Mwalim says. “Then what happened was that Western concepts of lineage and line and pedigree and so forth were imposed. If you think about it, the only beings that are asked about blood quantum are Indians, dogs, horses or cats.”