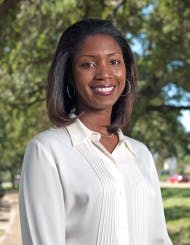 Dr. Rheeda Walker recently investigated a link between suicide as a result of racial discrimination with religion as a protective factor.In the African-American community, there is a great deal of shame and stigma associated with suicide. For Dr. Rheeda Walker, an associate professor and director of the Culture, Risk, and Resilience Lab at the University of Houston, misconceptions surrounding suicide must be addressed in order to create healthier communities for marginalized individuals.

“We talk to a lot of people (of African descent), and, qualitatively, they say it’s just not what you do and there is an assumption that people who try to kill themselves somehow have a weakness—and no one wants to be perceived as being weak,” says Walker, a native of Savannah, Georgia.

Though she entered the University of Georgia as a pre-law student, Walker soon took to psychology. During her classes, she became intrigued with depression and how it impacts African-Americans.

“When you think about depression, the assumption is that depressed people have experienced a lot of loss, stress and strain and oftentimes don’t have things that are going their way,” says Walker.

She also found that, unlike other ethnic groups, the way African-Americans exhibit depression can be more passive.

Throughout her undergraduate years, Walker explored the issue as a research assistant until she received a bachelor’s degree in psychology in 1994. Walker then went on to pursue a graduate degree at Florida State University (FSU), where she studied under an adviser who took part in research around suicide.

“I thought, well, suicide is related to depression so let’s see what the suicide rates look like,” Walker recalls. “I didn’t expect for them to be high because I was under the misconception that Black people don’t kill themselves, but at the time, suicide rates were going up exponentially, particularly for African-American men.”

According to the 2011 Center for Disease Control’s Health Disparities and Inequalities Report, in 2007, a total of 34,598 suicides occurred in the United States. Of those, 5.5 percent were among non-Hispanic Blacks.

As a professor, Walker has been able to mentor students who are interested in psychological research and provide psychological care for underserved ethnic minorities. Pursuing a career in higher education has also allowed her to continue a passion that she holds very dear.

“A lot of people say that it’s hard to be a practicing psychologist and to be able to do research, but being in academia I’m able to do some clinical work because I supervise doctoral students who see therapy clients (and) … I’m also able to do the research that I want to do. … The research is very important to me as far as better understanding emotional and mental health for African-Americans,” Walker says.

In one of her most recent studies, she investigated a link between suicide as a result of racial discrimination with religion as a protective factor.

The study used a sample of more than 200 individuals of African descent who lived in a community in North Georgia. The study found that there was, in fact, an association between experiences of racism and thoughts of suicide, in part because of a depressive state that can ensue after experiencing discrimination.

At the same time, participants who had strong religious connections had decreased thoughts of suicide.

Studies such as these are important, says Walker, because they act as tools to bring awareness about the signs of suicide in the Black community, potential protective factors and how to create environments where people can feel comfortable speaking about suicide.

“People who are thinking about suicide may be depressed and are having a hard time coming up with solutions and seeing things differently,” she says. “But to the degree that they can talk to someone who can help them problem solve and feel like their life has meaning, then I would have done my work.”