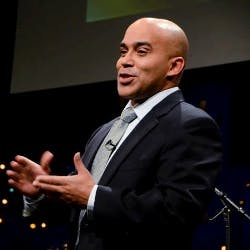 “As a socially conservative Black man, my father put a high value on presenting yourself well, being able to have a sharp analysis of what’s going on around you and being well read,” he says.

As an associate professor at The University of Texas at Austin (UT Austin), Foster has focused much of his life’s work on making an impact on the lives of young people, so they can, in turn, help to tackle some of society’s toughest issues.

“Some people have the privilege of having knowledge for knowledge’s sake, which is a wonderful thing,” says Foster. “But the reality is that for millions of people across the world — Black people in the U.S. in particular — our circumstances are absolutely dire. And when many of us make it into the middle class, I don’t think they get how bad things are for literally millions of people.”

He spent his undergrad years at the College of William and Mary in Williamsburg, Virginia. As a member of the wrestling team, Foster’s first three years were focused on sports. Academically, he took to anthropology.

“I had a dynamic professor who was an anthropologist,” Foster says. “ … [And I enjoyed] reading Du Bois, Zora Neale Hurston, St. Clair Drake — generations of Black thinkers who were anthropologists, and, I said, ‘This is a pretty cool way to go.’”

In 1991, he received a bachelor’s degree in economics and anthropology. Foster went on to UT Austin, with the intention of studying African-derived religion in the Americas.

However, as he began to interact with youth groups in the community, Foster moved toward educational anthropology.

At the same time, the university was battling a lawsuit against Cheryl Hopwood and three other White law school applicants who challenged its affirmative action program.

He became involved in the case, rallying to uphold affirmative action.

“I went all in,” Foster says. “I ended up taking a year of incomplete as I went across the country meeting with people in California and D.C. — going all in on this effort.”

While the case did not end in his favor, the fight stuck with him.

“It all became part of my identity — being in action and being a scholar whose scholarship had become connected to broader concerns,” Foster says.

He went on to receive a master’s and a doctorate in anthropology from UT Austin. Foster’s first appointment as a college faculty member came at Southern Illinois University Carbondale in 2001. He returned to UT Austin in 2005.

Throughout the years, Foster has continuously been involved in research around minority student achievement and culture. He has authored dozens of academic articles ranging from the experiences of Black students on predominantly White campuses and underground pledging practices of Black Greeks to the experiences of displaced minority students after Hurricane Katrina.

Foster’s most recent model of teaching can be seen on television. Airing on PBS, his media series BlackademicsTelevision features Black scholars who explore issues in education to empower youth.

“It’s like TED Talks for Black studies,” says Foster. “We bring in folks from all over the country to give 12-minute talks over two nights. It’s a big affair.”

For example, during a broadcast that aired in October 2013, Fordham University professor and former Alvin Ailey dancer Dr. Aimee Cox discussed women’s empowerment through dance. “Her talk had a lot to do with the circumstances under which groups of young girls come up and find empowerment through performance,” he says.

This past season also explored the topic of digital literacy and afterschool programs, presented by Dr. Heather Pleasants, director of the Office of Community Education at the University of Alabama, and Dana E. Salter, community service specialist at the Alonzo A. Crim Center at Georgia State University.

“They spoke about ways in which kids can be empowered through telling their stories, and digital storytelling is a great way to tell stories so that you also learn real-world skills,” says Foster. “They were amazing.”

A partnership between The Institute for Community, University and School Partnerships (ICUSP) — of which he is executive director — and KLRU-TV in Austin, Foster uses the platform to model intergenerational teaching. ICUSP staff, who produce the series, are at several stages of academia — some are current undergraduate students, while others have obtained graduate degrees. They all take part in shaping the program’s design, marketing, production, distribution and evaluation.

Launching this month, the third season of Blackademics will focus on the African diaspora.

Through ICUSP, which he founded in 2006, Foster also creates service-oriented programming that impacts youth. The organization was built out of its signature programs C.O.B.R.A. (The Community of Brothers in Revolutionary Alliance) and V.O.I.C.E.S. (Verbally Outspoken Individuals Creating Empowered Sisters), which are both academic and leadership development programs.

Across academia, Foster hopes that his approach in merging research, teaching and community service will become a trend.

“So if I’m someone who helps move the academy back towards community engagement, I would be a happy person.”