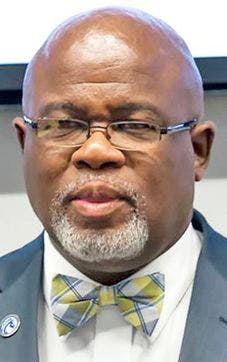 Dr. Curtis B. Charles will become the first Black president of the rural university founded in 1888.

Dr. Curtis B. Charles, who currently serves as the senior associate vice chancellor for institutional transformation at Fayetteville State University and founding executive director of the Center for Defense and Homeland Security, has been selected to lead Tiffin University in Ohio.

Charles, who has held administrative and teaching positions at the University of Miami, Barry University, Howard University and Morgan State University is an expert on cybersecurity issues and has won millions of dollars in national grants and contracts for the creation of Fayetteville’s Center for Defense and Homeland Security (CDHS).

“We took it from scratch,” said Charles of the center that he helped to create. “We were very entrepreneurial in our strategy.”

Charles, who has also held corporate positions with several companies, including IBM, said that Tiffin’s focus on homeland security made the job particularly attractive. Tiffin offers associate, bachelor’s and master’s degrees and has a robust online program.

“I was looking for a fit that’s in line with what I’m doing,” said Charles in an interview with Diverse. “We cannot outsource national security.”

At Tiffin, whose student population is about 97 percent White, Charles, who was born in Trinidad, said that he has plans to diversify the campus and to increase retention and graduation rates.

“Diversity is an issue,” said Charles, who will become the first Black president of the rural university founded in 1888. “I come to higher education from a business perspective, but I want to impact the lives of young people because of [what] I came through to receive an education.”

Growing up in Trinidad, life was difficult for Charles, who was one of seven children. He had to dig ditches in the countryside and work menial jobs to save enough money to travel to the United States, where he would later earn degrees from Howard University, MIT and Morgan State University.

Charles, who will begin the job on July 1, said that his one goal is to focus all of the university’s initiatives on student success.

“I believe that everything that we do should center on student success,” he said, adding that one of his mentors is Dr. Freeman Hrabowski, the president of the University of Maryland, Baltimore County. “Is the admissions office and the bursar supporting student success? And if not, what is the data saying?”

In introducing Charles to the Tiffin community, the chair of the school’s Board of Trustees, Claire Johansen, hailed him as a “strong leader” and “visionary who is passionate about organizational effectiveness and student success and demonstrates the entrepreneurial spirit of Tiffin University.”

Charles said that he’s spent some time examining models of institutions that have been successful.

“I’m a firm believer in not reinventing the wheel,” he said. “I’m going to listen. I am not coming in there thinking that the people who are there don’t know what they’re doing. I am by no way going to Tiffin without the grace of God.”