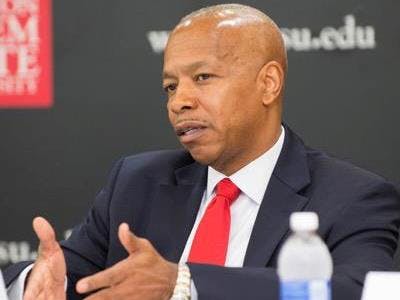 Winston-Salem State Chancellor Elwood Robinson wants to “create that kind of presence” that ingrains in WSSU students and graduates an expectation that they will change the world.

In an environment in which state and federal higher education appropriations are continuing a downward spiral, many public institutions are feeling the pressure of a resource deficit. For public historically Black colleges in particular, which have traditionally received less funding than their predominantly White counterparts and which typically serve students who are more financial aid dependent at a sticker price that is also often lower than their counterparts, this funding mismatch is a perennial problem.

But despite the doom-and-gloom narrative that is often projected on these institutions, three in particular are seizing an opportunity to look inward, producing new strategic plans that accentuate their strengths and build upon their weaknesses.

Winston-Salem State University (WSSU) Chancellor Elwood Robinson, who served as provost and vice president of academic affairs at Cambridge College in Cambridge, Massachusetts, said that taking note of the differences in not only resources in Cambridge versus his home state of North Carolina, but the differences in student disposition, motivated him to set a tone of excellence on campus when he was named chancellor of WSSU.

“Nothing disturbed me more as a North Carolinian than living in Cambridge — and Cambridge has to be one of the most elitist places in the world [with Harvard and MIT within the city limits and Yale fewer than 150 miles away] … but every student that comes to [those institutions] comes with the notion that they’re going to change the world,” Robinson said. “Our institutions typically don’t have that; our institutions are typically rooted in a history of racism, a history of discrimination and a history of unequal access.”

But Robinson said that he doesn’t want that to be the narrative at WSSU; he is working to “create that kind of presence” that ingrains in WSSU students and graduates an expectation that they will change the world.

WSSU Provost Brenda Allen said that the institution has achieved “a good marriage between sort of an elite educational focus and some of the more practical needs of the population that we serve.”

Indeed, 2015 was, as Robinson said, “a great year” for WSSU, with statewide surveys revealing the institution as tops in job placement of graduates — 79.2 percent of graduating seniors were employed upon graduation, higher than any other school in the state system, including the University of North Carolina at Chapel Hill. WSSU was also No. 1 in the system for highest salaries for its graduates and No. 2 in job placement and salaries for those completing graduate degrees at the institution.

The institution ranked seventh in the country on a national social mobility index, which identifies those universities which graduate students from underresourced communities who come back and contribute to the community upon graduation.

“You talk about the proudest moment of last year,” Robinson said. “These are the statistics that [Ivy League and other elite institutions] don’t want to hear about, [but] that is where we will always make our mark.”

“Here is the issue: if you come from a family — we get a huge percentage of students from families that make less than $50,000 [per year]. That student has a difficult time in college, not because they’re not ready for college, they’re not cognitively able, not intellectually ready for college, but because they don’t have the [exposure to a] college environ that is conducive for success in college,” he said. “A lot of people forget that negotiating a university and a college environment [isn’t] easy. … If you are a first-generation student, tell me how you know how to negotiate the college environment. Who tells you how to do that? And then you have families that also have to come in and negotiate that system,” with financial aid being an example of a system that is complicated even for those who are familiar with the college environment, he said.

“Access is one thing, [but] once you get there, are you equitable in terms of your policies and procedures and social support systems that allow that student to be successful in college?” Robinson asked.

A consistent challenge on many HBCU campuses is providing a high-quality educational experience that prepares future graduates to change the world while figuring out how to serve students who were not prepared to negotiate the collegiate environment.

At Delaware State University (DSU), Provost Alton Thompson said that there must be a focus on giving “our students exposure, because we are in a knowledge-based, global economy that’s digitally powered, so we’re trying to do all we can to expose our students to the global economy.”

At DSU, a number of international partnerships help the institution achieve this mission.

Thompson said that an increased focus on student success is key, as is making sure the institution’s “strategic plan lines up with the mission of the university and the positive vision of the administration.”

So, too, he said, is ensuring the institution is “attracting the best faculty possible for the university and also putting the best student programs in place to serve the needs of our students.”

Thompson said that there should be a conversation around “how you can advance their career [as faculty members] and advance the mission of the university at the same time.

Southern University’s new provost and executive vice president for academic affairs, Dr. M. Christopher Brown II, agreed, saying, “in order to teach effectively and to be able to have teaching relevance, you’ve got to be on the cutting edge. Research shouldn’t be separate and apart from the academic experience for the undergraduates.”

But Brown said there is often “a huge misunderstanding of what a faculty load is” and it is important that there is a mutual understanding between faculty and administration of “what their work is and getting them to be flexible in how they engage their work.”

Just as key as being intentional about attracting top faculty is having “the visionary and mature leadership that’s needed to make the tough decisions,” said Thompson.

For many public HBCUs, they consistently inherit oversight boards comprised of people with very little higher education or public fundraising experience, compared to their predominantly White counterparts, and in many cases, state-governing bodies that display almost adversarial attitudes toward the institutions.

Thompson said that DSU is fortunate in that it is the only HBCU in Delaware and has found a governor and state and federal legislators who “are really focused on higher education.”

“To date, our budget has not been cut,” he said, which paints a starkly different picture than the one presented at institutions in many other states.

Thompson also credits “a very progressive board of trustees that are very knowledgeable, that are very engaged, see the bigger picture,” are constantly engaging in professional development to compensate for anything they lack and who aid, rather than hinder, the institution’s progress.

In contrast, the Southern University System is governed by a Board of Supervisors that has seen its share of controversies over the years, most notably a 2013 letter from the Southern Association of Colleges and Schools (SACS) citing its negative impact on campus operations and finances. Officials, though, say that its vision and understanding of governance is a point of stability today.

“Our foundation is solid and the level of optimism, togetherness and possibilities are unlimited,” Brown said. “We are really in a moment where everyone has decided to move from good to great. From the board, to the president, the faculty, the senior administration, everyone is ready to go to the next level, and that’s an exciting time to be in any place.

“Combine that with the fact that Louisiana has a new governor, we just had elections, there’s fairly new leadership across the state,” said Brown — a state which had been one of the most adversarial toward not just the state’s HBCUs but higher education in general under the helm of former Gov. Bobby Jindal. Brown said that he believes that the Southern University System is poised to capitalize on what he called “a time of change and growth in Louisiana” from its position in the state’s capital.

To coincide with these changes and in preparation for the release of its own strategic plan, Southern — the nation’s only historically Black system of colleges and universities — has restructured leadership, centralizing operations at the flagship campus in Baton Rouge with the merger of the system president and local campus chancellor positions and the creation of the new executive vice president for academic affairs and provost position Brown now occupies.

In a climate in which state budget cuts have significantly impacted their institutions, both WSSU and Southern are having to be creative in the ways that they compensate for the funding gaps.

“I think strong fiscal controls and good fiscal discipline have gotten us to where we are, but the reality is we won’t be able to hold the road like we had been doing forever,” Brown said. “The state [funding] won’t be there forever.”

“At this very moment, we’re doing a new tuition cost and budget analysis. We want to make sure that we are properly priced in the marketplace. You don’t want to overprice yourself and you don’t want to underprice yourself,” said Brown. “There’s no one silver bullet to the resource reality that any public university finds itself in in a confusing global economy.

“Fundraising on the philanthropic side is going extremely well,” he continued, “but we just can’t really lean on any one of those tools. [Fundraising] is the answer; enrollment is the answer. We’ve got to pull all of the pieces together to make this work.”

From funding to the changing demographics of the traditional student to even the evolving of the purpose of higher education, Thompson said that institutional leaders “have to realize that that landscape in higher ed is changing and you’ve got to be able to adapt to it.”

“The tools of education that have been tried and true in developing graduates who can thrive in any kind of economy have existed for a very long time, they just [have] not existed in places like many HBCUs and many institutions that serve folks from” underresourced communities, Allen said. “If we are really going to deal with any of the achievement gaps or any of the gaps that we see across race and across class, we are going to have to figure out a way to bring those models to all of our institutions.”