Elbow Room: How the Dark Room Collective Made Space for a Generation of African-American Writers 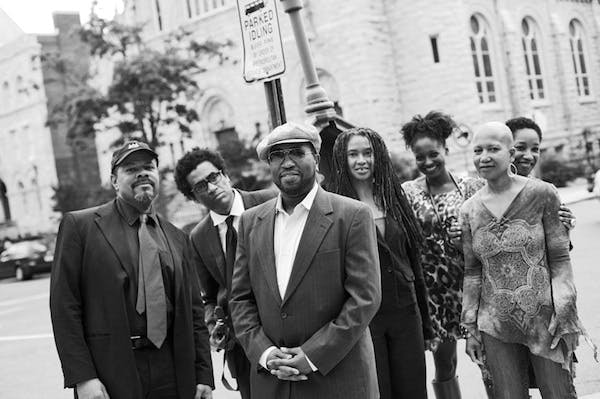 No outward sign sets the pale yellow house at 31 Inman Street apart from its neighbors. Someone going on a literary pilgrimage in Cambridge might start a mile away, at 104 Irving Street, where e.e. cummings ’15 grew up; then head west, to 16 Ash Street, where T.S. Eliot ’10, A.M. ’11, Litt.D. ’47, studied Sanskrit in the attic; then westward still, to the final residence of Robert Frost ’01, Litt.D. ’37, at 35 Brewster Street—guided the whole way by blue historical markers, never thinking to glance in the opposite direction. But back in Central Square, that anonymous Victorian was the cradle of the Dark Room Collective. There, in the late 1980s, a trio of young African-American writers—Sharan Strange ’81, Thomas Sayers Ellis, and Janice Lowe—formed their own literary center of gravity. During its decade of existence, their reading series and writers’ group gathered a nebula of creative energy, a starry critical mass whose impact on American letters continues to expand.

The Dark Room Collective (DRC) was a haven for early members like writer and translator John Keene ’87, experimental prose writer Tisa Bryant, and poet Patrick Sylvain, Ed.M. ’98—a place to get together and get serious about their craft. It was “a whole ‘nother kind of education,” says Keene. “It was an immersion in a world that I only kind of glimpsed when I was in college.” By e-mail, co-founder Sharan Strange comments, “I often say that working within the DRC and curating the reading series was in many ways my true M.F.A. experience.” The reading series was also an early performance venue for then-emerging talent—from current Boston poet laureate Danielle Legros Georges to Natasha Trethewey, RI ’01, U.S. poet laureate from 2012 to 2014. Many others passed through over the years, including Aya de Leon ’08, now director of Poetry for the People at the University of California, Berkeley; poet and critic Carl Phillips ’81; visual artist Ellen Gallagher; sound artist Tracie Morris; and actress Nehassaiu deGannes. In all, the participants’ published books number in the dozens, and they have earned fellowships and nominations and wins for honors like the National Book Awards, Whiting Awards, and Pulitzer Prizes.

Read the full story via Harvard Magazine: Elbow Room: How the Dark Room Collective Made Space for a Generation of African-American Writers