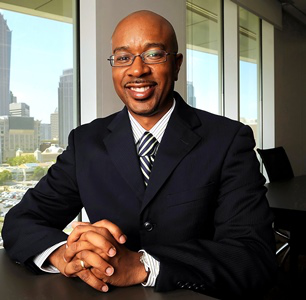 The city of Charlotte will pay tribute to its Black male high school graduates in an inaugural baccalaureate service scheduled to take place next month at Johnson C. Smith University.

Sponsored by the Beta Nu Lambda Education Foundation in partnership with the Charlotte-Mecklenburg Schools (CMS), the event is the first of its kind. Organizers say that the gathering will be an opportunity to celebrate Black males for completing 12 years of school while also encouraging them to go on and be lifelong learners.

At a time when high school graduation rates for Black males continue to face a sharp decline, the organizers of the event say that not enough is being done publicly to laud those Black males who make it through despite a series of obstacles, setbacks and hardships.

“We want to change the narrative and create a new image,” says Trevor Beauford, a youth pastor and former middle school teacher who came up with the idea of the city-wide baccalaureate service.

And the service, which will be held June 5 and keynoted by Dr. Chance W. Lewis, the Carol Grotnes Belk Distinguished Full Professor of Urban Education in the College of Education at the University of North Carolina, Charlotte, isn’t just for Black males who are college-bound, although representatives from area colleges including Central Piedmont Community College will be on hand for graduating seniors who may still be interested in enrolling in college in the fall.

As the men march down the aisle in their caps and gowns, organizers say that older Black men throughout the Charlotte metropolitan area will be on hand to cheer them on.

“We want to have these men say to these young brothers, ‘Hey, we’re proud of you. You’ve got your diploma, now what?’” says Beauford. “We want the older men to show them affirmation and what is possible.”

Certainly, there are no shortages of successful Black men in the city of Charlotte.  Harvey B. Gantt, the first African-American mayor of Charlotte, remains a fixture in the city as does Anthony Foxx, who was mayor but stepped down in 2013 to become the Secretary of Transportation in the Obama administration. The city’s current police chief, Kerr Putney, is a Black male as is Eugene A. Wood, who is president and CEO of Carolinas HealthCare System, which is also based in Charlotte.

The high school graduation rate of Charlotte’s Black students in general—and Black males in particular—has improved steadily in recent years. The four-year cohort graduation rate rose to 88 percent in 2015, a nearly three-percentage-point jump from 2014 and more than 18 percentage points since 2010, according to education officials.

But they say more needs to be done.

“I cannot say that things are not improving,” says Dr. Moses Fox III, a partnership coordinator for the CMS schools and an organizer of next month’s ceremony. “But I have to ask, is it improving fast enough?”

Several years ago, the CMS Superintendent established a task force on African-American males. One of its early recommendations was an all-Black-male school in the district.

Lewis, who was on the task force, says that he’s honored to have been tapped to deliver a message to the graduating men.

“It takes the work that I do and brings it full circle,” says Lewis, who is a leading expert on Black male achievement and urban schools. “I’ll get a chance to speak to the hearts of these young men and celebrate their accomplishments, knowing the obstacles that they’ve faced to this point, but also to encourage them to make wise decisions.”

Lewis says that he hopes other cities across the nation develop a similar type of ceremony.

“Our city is already buzzing about it because it changes the narrative,” he says. “Images like this, you don’t really see at the high school level.”

Organizers in Charlotte say that plans are already underway to make this a yearly event and that it’s not too late for graduating high school males to click here to register for the ceremony.